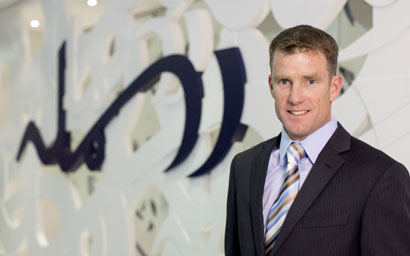 Rasmala’s trade finance fund recently passed $100 million in assets. Doug Bitcon, head of credit strategies, explains why he has to be hands-on. “We don’t tell the client we’re coming,” says Doug Bitcon, head of credit strategies at Dubai-based Rasmala. He’s discussing a subterfuge that helps his team check that collateral on finance from his firm’s fund is where it should be. As one of those managing the fund, which provides trade finance to small businesses across the Middle East and Africa, he has made dozens of inspections. These journeys have taken the intrepid South African from fertiliser warehouses in Zambia to a facility in Tanzania that refurbishes train locomotives – even to ships that are bunkering, or refuelling, offshore. Of course, some due diligence can be left to the fund’s counterparties, such as its collateral managers. But there is no substitute for seeing things at first hand, says Bitcon. “You need guys who are regularly visiting these warehouses.” The humdrum business of checking stock inventory and inspecting industrial equipment seems rather remote from the duties of a typical fund manager. Managers of conventional equity or bond funds are often deskbound. They read financial reports, watch financial information on their computer screens and occasionally go to lunch with investors. They face health risks no more severe than a paper cut. Not so for managers of alternative asset classes such as trade finance, who do not invest in listed assets. In Rasmala’s case, the assets might be described as loans; though, because the fund is sharia-compliant, Bitcon uses the term “financings” instead. “It’s a labour-intensive strategy and it requires more hands-on intervention,” says Bitcon. “Therefore it’s more expensive to run than an equity or fixed income fund.” Growth
The expense has not stopped an increasing number of asset managers from launching these kinds of strategies. Launched three years ago, Rasmala’s fund recently passed a milestone of $100 million of assets. These kinds of funds are helping to meet a need among small and medium-sized businesses for short-term financing. Banks, which traditionally provided trade finance, are less able to do so because of regulatory changes. In Europe, this is because regulators have pushed banks to improve their capital ratios. Banks responded by lending less and hoarding more on their balance sheets. In the Gulf region, the sustained low oil price has forced banks to shore up their liquidity at the same time as government spending has been withdrawn from the economy, causing pain for businesses that rely on government contracts. The withdrawal of bank lending is an opportunity for asset managers, however. According to Rasmala’s fund factsheet, there is a $1.6 trillion gap in global trade finance that is growing each year. Rasmala’s fund has attracted investors among institutions, family offices, corporates and wealthy individuals. By careful management of its portfolio, it has achieved a return of 4.5% a year since inception – not a remarkable return compared with some equity markets, but a solid income that is likely to be uncorrelated with major indices. Advantages
In managing its portfolio, Rasmala’s fund has some advantages compared with other lenders. Insisting on collateral is a good way for a lender to protect themselves against the possibility of a default. However, banks are often prevented by regulations from owning certain types of asset, for instance commodities. Rasmala’s fund does not suffer this limitation. It can take physical ownership, for instance, of a quantity of oil. If the borrower defaults, the fund sells the oil. There is no need for a lengthy and possibly costly battle in court. Rasmala has also been able to structure its fund as a sharia-compliant vehicle, meaning it is available to those that are obliged to invest according to principles of Islamic law. Trade finance is in key with a religion whose roots are decidedly mercantile, in which the paying of rent is acceptable but the paying of interest is forbidden. Bitcon says the fund has been popular among sharia-compliant investors that are looking for investment options in an environment of anticipated interest rate rises. That said, there are challenges with maintaining a sharia-compliant structure in a complex fund that finances many different businesses. One problem is that Islamic insurance is not yet well developed and Islamic insurers are sometimes not able to offer policies to cover the fund’s needs. Bitcon says the fund has approval from its sharia scholars that it can use traditional insurance when sharia-compliant insurance is not available. Work
Thanks to insurance, and careful scrutiny, the fund has so far suffered few losses. Bitcon says about $1.4 million of financings have defaulted out of a total of about $360 million. Of those defaults, the fund’s loss was about $75,000. That’s not to say it’s all been easy. Managing the fund requires a lot of effort, which is why Rasmala has brought in two additional staff members to help with due diligence and to communicate with the third parties the fund relies on. “The day-to-day management of collateral reports, making sure you know where the money is, tracking the movement of goods, that all has to be done,” he says. In addition, Bitcon has encountered stresses in the market related to the low price of oil, which has made the operating environment challenging. The fund launched in 2014, roughly at the same time as the oil price collapsed from more than $100 a barrel to about half that. These factors have had knock-on effects for many businesses. And of course, there are the challenges of operating in countries that are either emerging or frontier markets. These are challenges Bitcon has witnessed at first hand while conducting inspections of his clients’ premises. “We went to Zambia and there was a downpour,” he recalls. “We were stuck in traffic and missed our flights. Now, when people say something is delayed in Zambia for a day or two, we understand why.” ©2017 funds global mena