INSIDE VIEW: Fintech in the Gulf picks up momentum 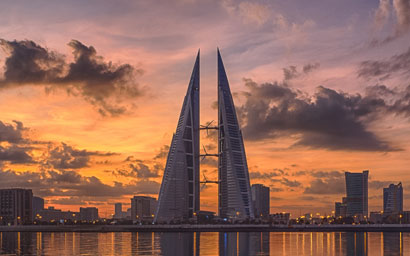 Changes in financial technology have been transformativE – but historically, fintech has been more of an ambition than a reality in the Gulf. That could soon change, says David Parker of the Bahrain Economic Development Board. It is something that we are seeing across the region – initiatives that were good intentions in the past are now gaining real momentum. This hasn’t come from nothing. A lot of hard work has been done across the region in the past two years to establish the basis of an ecosystem that can support a vibrant fintech sector. We are now beginning to see the fruits of those efforts. For example, in just the past year or so, we have seen the launch of RegLab in the Abu Dhabi Global Market and the regulatory sandbox in Bahrain. In the past, any fintech solution or product had to be developed under the standard regulatory framework. While this offered strong protection for consumers, it limited the ability of businesses to experiment and innovate. These new regulatory structures provide the ability to test new products in a controlled environment and form the basis for new opportunities for fintech in the region – whether it is innovation by existing players in the industry or start-ups. Likewise, we have seen the establishment of several fintech-focused accelerators in the Gulf this year, including the Fintech Hive in the Dubai International Financial Centre and the recent partnership between the Abu Dhabi Global Market and Plug and Play. While each accelerator has its own focus, there is a common aim of enabling companies to get access to the expertise and funding they need to scale up, solve an innovation challenge, or take something from an idea stage to a consumer-ready product. And far from levelling off, if anything this momentum is accelerating. In fact, in just the past few months, we have seen a range of new developments. To cite just a few, in terms of regulation, the Abu Dhabi Global Market announced guidance on Initial Coin Offerings and the Central Bank of Bahrain announced the creation of a specialist fintech unit to support the development of the sector. We’ve also seen the launch of Bahrain Fintech Bay – set to be largest dedicated fintech hub in the Middle East and Africa –  and an announcement from the research arm of the Islamic Development Bank that it will use blockchain technology in developing Islamic finance products to support financial inclusion. However, perhaps most excitingly, we are beginning to see the potential of the sector being realised, not just in terms of public-sector initiatives, but also in investor sentiment. According to data from MAGNiTT, fintech companies accounted for three of the top five largest investments in MENA start-ups in the third quarter of 2017. PayTabs ($20 million), Souqalmal.com ($10 million) and Beehive ($5 million) were among the biggest deals in the three-month period, with investment exceeding that in the previous quarter. At a time of growing investor interest and involvement in start-ups in the Middle East, fintech is attracting particular attention. Firm foundations
This momentum is impressive – but many will ask whether it is sustainable. Fortunately, the industry is being built on firm foundations and there is clear potential for fintech in the region. The Gulf is home to a fast-growing, young population who are highly technologically adept. It has some of the highest rates of smartphone penetration in the world. There is a clear interest in, and demand for, goods and services to be delivered in a new way, whether that is from businesses, governments or financial institutions. So it is no surprise to see comparison websites like Souqalmal or payment processors such as PayTabs flourishing, expanding and attracting investment. In order to maintain the momentum, and to enable promising ideas and start-ups to become international businesses, we need to ensure that these companies continue to have what they require to expand. Perhaps most obviously, that means ensuring that businesses have access to the right sort of capital at various stages of growth. In some cases, this may involve direct government capital, but the bigger impact will come from finding ways to connect local and international private capital with investment opportunities. There have already been efforts by regional governments to enable easier investment by venture capital firms, to make it easier for banks to lend to small businesses and to create equity capital markets tailored to the needs of growth companies. These schemes include Saudi Arabia’s Parallel Market and the Bahrain Investment Market. The other key element will be enabling businesses, whether start-ups or existing players, to have the access they need to other elements that will drive innovation. For example, for start-ups that aspire to reach regional or international, and not just local markets, access to international expertise becomes particularly important. This is not just an ambition – we are already seeing examples of fintech start-ups from the region expanding globally. For example, PayTabs’ recent fundraising was designed to support plans to expand to more than 20 markets over the next two years across the Middle East and North Africa, Southeast Asia, India, Africa and Europe. Given the right funding and the right expertise, the region is more than capable of generating ideas and solutions that have international reach. We are still in the early days, but the momentum we have seen in the past year is exciting. The potential of fintech to unlock large amounts of new savings and investments, drive higher levels of financial inclusion around the Middle East, and provide the finance for the transformation of the region’s economies, is vital. We look forward to seeing what the next year brings. David Parker is executive director of the Bahrain Economic Development Board ©2017 funds global mena