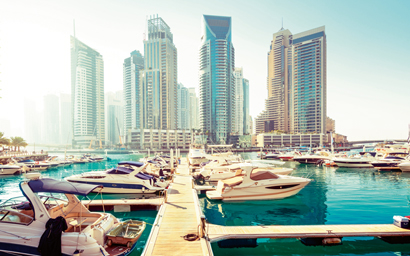 Indians are the biggest foreign property buyers in Dubai. They plough billions of dollars into the region in search of safe offshore assets and lucrative returns. Indrajit Basu reports.

In the first half of this year, Indians spent $1.9 billion on property in Dubai. That made them the biggest group of foreign buyers in the emirate, ahead of British buyers, who spent $1.1 billion in the period, and Pakistanis, who spent
$820 million.

Indeed, over the past four-and-a-half years, Indian purchases of residential and commercial real estate in Dubai came to $22 billion, according to the Dubai Land Department.

For wealth managers in the region, Indian investors are a key client segment, which could become even more numerous as wealthy Indians turn their backs on the less-enriching real estate market at home, where rental yields tend to be lower.

But the influx of Indian money is not only good for wealth managers. The sheer size of their investments supports the region’s economy, propping up property prices to help ensure steady returns.

CLOSE TO HOME
“While the Indian economy is back on the growth path, the Gulf region on the other hand is suffering from softening of oil prices, reducing incomes and a slowing economy. Hence, Indian investors are providing the much-needed capital to the real estate sector while ensuring potential returns on investments and higher yields on rental incomes,” says Ashwinder Raj Singh, chief executive of JLL India, a real estate services firm that channels Indian investments to international property markets.

Buyers’ motivations are many, but the two critical drivers are geographic proximity and attractive returns on investments relative to their home market.

“While diversification of investments is the basic reason behind Indians’ investments abroad, the major factors responsible for that interest are Dubai’s proximity to India, and expectations of better returns both in terms of rental yield and capital appreciation,” says Singh. “The major difference is that the prices are extremely low [in the Middle East], so returns are higher.” 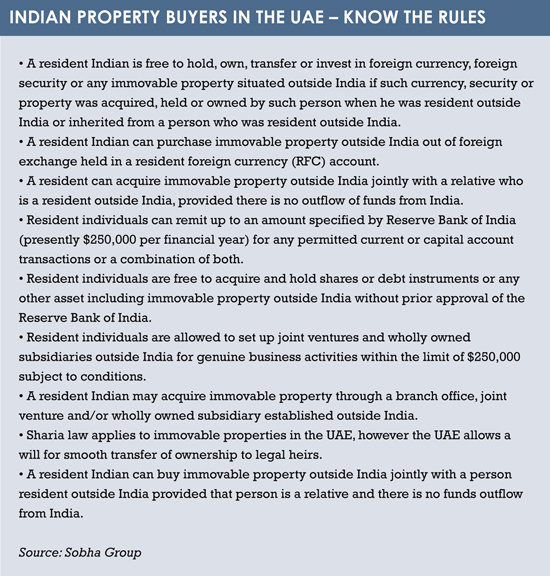 For instance, while the average rental yields are less than 3% in India and about 4% in London and Hong Kong, yields in the UAE can vary between 6%-10%, according Dubai-based real estate firm Luxhabitat.

Similarly, the average capital cost in prime locations such as Dubai Marina, Business Bay and Downtown Dubai is 30%-50% less than prices in comparable properties in Mumbai or New Delhi, say industry sources.

“A tax-free environment, which means that investors – unless they are a foreign bank or an oil company – do not pay any income or property tax, acts as icing,” says Ritesh Raman, marketing head of Falconcity of Wonders, a local property developer.

Besides, with a flight time of only four hours from New Delhi, Dubai is a shorter commute than between, say, Delhi and Chandigarh by land.

Small wonder then that, according to Luxhabitat, while Indians own “most of the most prestigious properties there”, they are buyers in the lower segment of the market as well.

Alexander von Sayn-Wittgenstein, luxury sales director at Luxhabitat, says: “Typically Indians are now seeking a return on investment of above 6%, which is higher than bank rates in India, while the Indian stock markets are volatile. Real estate in Dubai and the Gulf then emerges as attractive for Indian investors since rents are also paid annually, up front.”

FAMILIARITY
But, it’s not just hard numbers and returns – there’s also a comfort factor, because Indians tend to be attracted by the relative transparency and maturity of the region’s real estate markets, say sources. The recent provisions introduced by the Real Estate Regulatory Authority and the Central Bank of the UAE, for instance, not only ensure a stable property sector, but also cater to the interests of foreign investors.

“Unlike in some parts of India, there are no touts or political interference. And the size of the Indian diaspora is huge,” says Sushil Kumar of Auric Acres Real Estate, a real estate consultant firm based in India and Dubai. “The Middle East is also like a second home to wealthy Indians.”

According to Bayut.com, a real estate tracking firm, although the UAE is generally seen as an oil-dependent economy, 71% of its total GDP comes from non-oil sectors. So, a stable economy is yet another big draw for foreign investors.

That apart, the administration in the UAE ensures political stability. Bayut.com adds that the rulers of all seven emirates, for instance, support each other in political matters even as they work hard to be one of the safest regions in the world.

Still, even as Indian investors throng the market, some say the region would benefit from the services of more independent wealth managers to direct them in their investments.

“There are a lot of investors looking to invest in Dubai as well as other Gulf countries and not everyone is well versed with the local laws as well as the required process to purchase property. Hence, the requirement for wealth managers and advisers is very high,” says Singh of JLL.