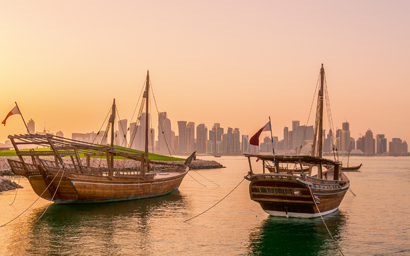 In a difficult year for the oil-exporting countries of the Middle East, Qatarâs economy is expected to grow nearly 5%. George Mitton reports.

What a difference a year makes. In 2014, current account balances in the GCC ran a surplus of 15%. This year, they are expected to sink to a deficit of a quarter of a percent. That’s the prediction of an International Monetary Fund (IMF) report, released in October, on the economies of the Middle East and the wider region.

In essence, the report distils what many already know – the longer the oil price stays low, the more pain it will inflict on the oil-exporting nations. Government spending projects will be delayed, foreign investments assets may be sold to balance current accounts, long-established subsidies will be axed and new forms of taxation, such as VAT, will appear. More worrying still is the prospect of consumers and businesses delaying purchase decisions until after economic growth has stabilised, a reaction that could worsen the slowdown.

However, the economic malaise will affect different countries in different ways. The IMF predicts the growth rate in Qatar will be 4.7% this year, the fastest rate of any of the oil-exporting nations in the MENA region, which on average are predicted to grow just 1.8% in 2015. What does this comparative strength mean for asset management in the region?

A SMALL HITTER
Qatar is one of the smaller Gulf states, with a surface area no larger than the US state of Connecticut. However, ever since oil and gas were discovered – and especially since the country’s investment in liquefied natural gas facilities began to pay off – the country has been modernising fast, with a dazzling average growth rate of 13% a year between 2000 and 2011.

The country remains limited by geography and a relatively small population of a little over two million. However, as one UAE-based fund manager comments, this is a country “constrained by size but not by ego”. Evidence of Qatar’s world-shaping ambitions is revealed in its bid to host the 2022 FIFA World Cup (more on that later), its influence on the global media thanks to its ownership of the Al Jazeera Media Network and its attempts, somewhat moderated under the new emir, to exert a geopolitical role by, for instance, trying to mediate between the Egyptian government and the now-banned Muslim Brotherhood – an exercise that has created friction with both Cairo and Riyadh.

The economic boom in Qatar has attracted investors such as Nick Wilson, chairman of the Qatar Investment Fund, a British Virgin Islands-domiciled investment vehicle that buys Qatari equities. He remains enthused despite the recent drop in oil prices.

“Qatar is about more than just hydrocarbons,” he says. “In the last few years, there’s been a strategy to diversify. A lot of GCC countries say that, but Qatar has moved to a position where 62% of the economy is non-hydrocarbon. There are a diverse number of industries, for instance, including the biggest aluminium plant in the world, a joint venture with Norway.”

The biggest attraction for investors such as Wilson is Qatar’s ambitious infrastructure build-out scheme, which, he says, will see $200 billion of projects carried out in the next eight years. These include a metro system more than half the size of London’s, a plethora of new hotels and a new airport.

The question, of course, is whether Qatar can afford to meet all its spending obligations now oil prices have fallen (gas prices are typically linked to the oil price). The Qatari finance minister said in September that the country had no plans to cancel any major development projects or cut state fuel and food subsidies. However, in November, the emir of Qatar, Tamim Al Thani, used somewhat different language, warning that government could no longer afford “to provide for everything”. He said the low-oil-price environment was an opportunity to confront wasteful government spending, corruption and bureaucracy.

In Qatar’s favour, the ‘break-even oil price’, below which its economy would fall into deficit, is believed to be the lowest for any Gulf country apart from Kuwait. Even if oil prices fall very low, Qatar could liquidate some of the assets in its sovereign wealth fund, the Qatar Investment Authority.

WORLD CUP
That said, much is uncertain in Qatar, one example being its right to host the 2022 World Cup. As scores of newspaper headlines attest, its hosting the tournament has generated much controversy. Critics either focus on the timing of the event – in mid-summer, when temperatures in Qatar routinely exceed 40 degrees Celsius – or on the allegedly inhumane conditions of the labourers who are toiling to build the stadiums and other infrastructure needed to host the event. As it stands, Qatar is still hosting the tournament, but there is a possibility that FIFA, itself an embattled organisation whose credibility has been damaged over corruption allegations, may have to do a U-turn and grant the World Cup to someone else.

Would such a loss sabotage Qatar’s economic growth? Wilson thinks not. He has calculated that no more than a tenth of the $200 billion spending plan is specific to the World Cup. Nor does he think it would be a great loss if the tournament were to go to someone else. “There is little evidence the World Cup leads to long-term tourism growth. The year after South Africa hosted the World Cup, tourism there grew by 7%. But globally, tourism grew 11% that year because the world was emerging from a recession.”

PROBLEMS
Some investors have other concerns about Qatar, aside from worries about the World Cup being cancelled. One is that the options for investment on the Qatar Exchange are limited. Like many of the Gulf states, Qatar’s stock market does not represent the economy at large. The petrochemicals sector, for instance, is largely state-owned and unlisted. Wilson’s fund invests half its money in banking stocks, which he argues are a substitute for the wider economy.

Another concern is that the interests of foreign investors are not protected by the Qatari government, which lacks an incentive to court foreign capital.

“The issue for investors in general is that, given that the government doesn’t need the capital, we’ve seen few IPOs [initial public offerings],” says Salah Chamma, co-head of MENA equities at Franklin Templeton. “When IPOs do happen, the government seems to be using the market to transfer wealth to the local population, as opposed to using it as a funding tool.”

An example of the latter phenomenon was the IPO of Mesaieed Petrochemical, a unit of the state-owned petrochemical firm, which listed on the Qatar Exchange in February 2014. The IPO was open only to Qatari citizens, while foreigners had to wait to buy on the secondary market.

On the first day of trading, shares rose in value five times over.

Events like this leave some investors concerned that the Qatari authorities do not have the interests of foreign portfolio investors at heart. That said, the authorities have made progress in recent years in modernising their stock market and their efforts were rewarded in May 2014 when Qatar (along with the UAE) was upgraded to emerging market status by index provider MSCI. In recent months, some Qatari companies have increased the proportion of their shares that are open to foreign investors, underlining the move towards international norms.

As potential investors survey this interesting market, they will naturally examine economic growth. But they will also want to see to what extent Qatari egos can convert dreams into reality.