IRAN: Dreaming of a détente

A deal to end sanctions on Iran could unlock billions of dollars of investment into the country, including inflows into Tehranâs attractive stock market. But will it happen? George Mitton reports.

In the 1970s, a consortium of American nuclear power companies issued a fascinating advert that featured a picture of the Shah of Iran under the headline “Guess who’s building nuclear power plants”. Although the idea seems remarkable today, the aim of the advert was to encourage Americans to embrace nuclear power by arguing that their trusted ally in the Middle East, Iran, was doing so.

So much can change in a few decades. Ever since the Iranian revolution of 1979 that saw the Shah being replaced with the Ayatollah Khomeini, the US and its allies have done everything they can to frustrate Iran’s nuclear development, believing, with justification, that Iran is trying to build a nuclear weapon.

As a result, Iran endures a debilitating sanctions regime that isolates the country from global financial markets. The economist Nasser Saidi estimates that if sanctions were to end, the country could absorb $800 billion of foreign investment in the next ten years, and he says this is a conservative estimate.

NEGOTIATIONS
For the first time in years, an end to sanctions seems possible, thanks to the election last year of Hassan Rouhani, Iran’s reform-minded president. If détente with Iran does happen, would asset managers want to allocate capital there? And what would it mean for the politics of the region?

A lot has changed since the tenure of Mahmoud Ahmadinejad, Iran’s last president, who would often invoke violently anti-western rhetoric. Rouhani, who was elected last June on a platform of dialogue with the West, has in his political team many western-educated, highly capable Iranians who want to see market-based reforms.

Iran remains beleaguered after years of sanctions. The country’s GDP shrank more than 6% in 2012 and inflation crippled the value of its currency – it seems ready
to make concessions to improve the economy.

The Americans, the crucial partner in any deal, also have a desire to negotiate. After two difficult wars in Afghanistan and Iraq, the Americans are more willing to pursue diplomacy than they were under the Bush administration. Crucially, they are beginning to see Iran as a potential ally against a common enemy, the Islamic State in Iraq and Syria.

At time of writing, the main parties are preparing to meet in Vienna and although it seems unlikely that Rouhani will meet his target of signing a deal by November 24, he has said he is certain of reaching an agreement. The discussions will centre on which sanctions will be lifted and when, and what guarantees the Iranians will make to reassure the West that they will stop enriching uranium to make weapons. 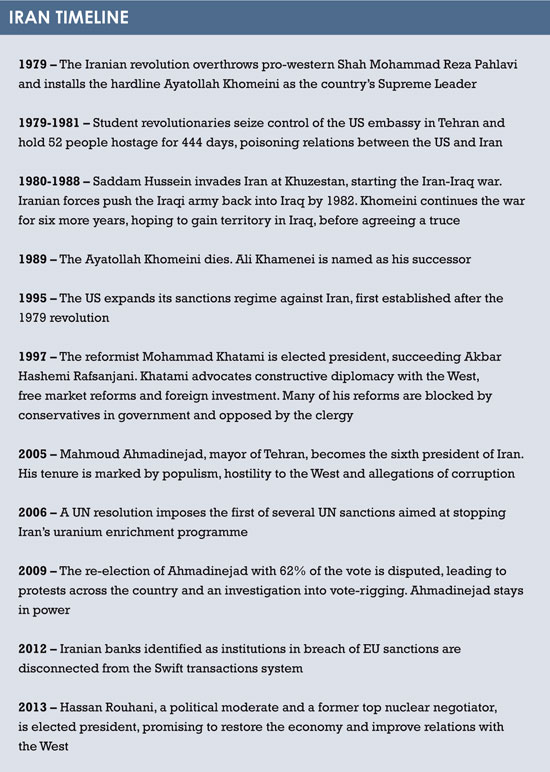 “They already have a Foreign Investor Protection Act. Many of the building blocks of foreign investment are already there.”

Levy says he would welcome the opening of the Iranian market to foreign investment because it would give new opportunities for managers of frontier market funds. The Tehran stock exchange was worth $126 billion as of August, at the official exchange rate, which is about the size of the Dubai Financial Market.

The country’s economy may have turned a corner, too. After 24 months of negative GDP growth, the country’s economy expanded in the quarter ending in June 2014, according to the Central Bank of Iran. Importantly, the exchange looks like good value. Prices on average are 5.5 times earnings, well below the comparable ratio for most emerging markets, according to an August report from Turquoise Partners, an asset manager in Iran. The stock market has been trending downwards lately, down about 18% so far this year, but that follows a stellar 2013 in which the stock market more than doubled, buoyed by Rouhani’s win and hopes of sanctions relief.

Levy says the main barriers to investing in Iran are sanctions against the Swift settlement system, which mean it is not possible for a western-based asset manager to buy public equities in the country. Should these sanctions be lifted, he says his firm’s internal compliance teams would be quick to develop a mechanism for buying Iranian stocks so that his fund could allocate capital to the country.

KNOCK-ON EFFECTS
Détente with Iran would have knock-on effects for other countries in the MENA region. The most obvious beneficiaries would be the Gulf states, which in 2008-09 were exporting goods worth more than $13 billion to Iran. The full onset of sanctions caused the value of this trade to plummet. Dubai’s trade with Iran in 2012, for instance, was a third of what it had been only a few years earlier.

A deal ought to restore trade to at least the levels of 2008 and earlier. According to Hasnain Malik, head of frontier markets strategy at Exotix Partners, sanctions relief would lead to an additional 5% growth per year in Dubai, which over a few years, could add significantly to economic growth in the UAE.

Another Gulf state to benefit would be Oman, says Malik, which has a rising need for imported gas to fuel industrialisation. “If the détente proceeds to loosening of sanctions then this should drive the construction of a pipeline project connecting Iran, Oman and India,” he says. As well as supplying Oman with Iranian gas, this pipeline could help restore Oman’s historic position as a hub for Iran-India trade, he adds.

Pipelines could also benefit the oil exporting nations of the Gulf. It would be cheaper and more efficient for Kuwait, Saudi Arabia and the likes to sell oil to Asia by pumping it overland through Iran, and it would spare the need for oil tankers to navigate the crowded waters of the Gulf. But cooperation on such a project requires détente with the West.

On top of all this, détente could allow Iran and the Gulf states to resume negotiations on a free trade agreement, which began in 2008 and stalled. This could lead to more significant economic cooperation over time.

LIKELIHOOD
The negotiations clearly have potential benefits. Will they succeed? This depends on the willingness of the participants to make compromises. The key for the western negotiators will be to convince Iran to agree to limit its uranium enrichment programme to a level the West finds acceptable, and to agree to inspections. Iran will want to get as many of the sanctions lifted as possible, though probably only the most recent and most damaging sanctions would be lifted in the first stage. 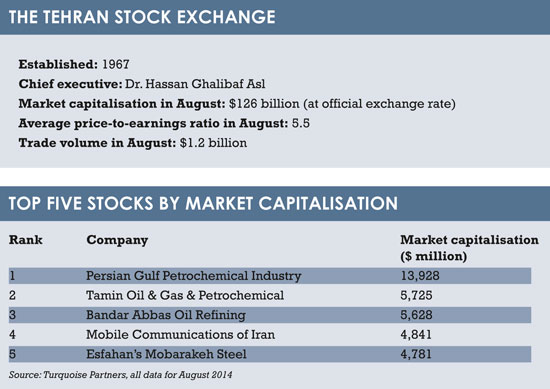 The stakes are high for either party. President Obama risks criticism at home for being too soft on a country notorious in America for holding diplomats hostage and calling the US “the great Satan”. Rouhani risks being outmanoeuvred by hardliners in his own country who are opposed to any deal that weakens Iran’s position. Then there are influential powers in the region who are opposed to the deal, most notably Israel, but also Saudi Arabia, which sees Iran as a rival power in the Middle East.

Against these obstacles, can the dealmakers succeed? RP Eddy, a former government official at the White House National Security Council who now runs a consultancy called Ergo, says he is hopeful of a deal even though it goes against his experience.

“A lot of my career was in counterterrorism,” he says.

“A lot of my career was working against Iran. It’s hard for me to accept, but I think this negotiation has promise.”

IMPLICATIONS
Negotiations may be helped by the current low oil price, which is partly due to shale oil in the US. The low price puts extra pressure on Iran’s already limited public finances, and ought to motivate the Iranians into making a deal.

Nasser Saidi, a former Lebanese politician and economist, believes that détente with Iran, if it happens, would be transformational for the region. Not only are there the economic benefits to consider. (His previously mentioned estimate of $800 billion is based on anticipated foreign investment of 20% of Iran’s GDP per year for a decade, which he believes is a conservative estimate of the amount that could flow in.)

There are also huge benefits in terms of stability.

“Only a Pax Americana-Irania can lead to a stabilisation of Iraq, Afghanistan and Pakistan, and prevent Syria from turning into a failed state with destabilising spillovers into neighbouring countries, notably weak Lebanon and Jordan,” he says.

Stabilisation would indeed be a boon for the Middle East, a region which, proportionally, spends more than any other on arms. If a US-Iran alliance could bring peace to the region, there would be an economic boost as military spending was diverted into other sectors, a “swords into ploughshares” phenomenon.

The effects would be magnified if a US-Iran deal could help end hostilities in neighbouring Iraq, as Saidi hopes. In this scenario, there would be a need for $700 billion of foreign investment to restructure Iraq, Saidi says.

Whether a détente will happen depends on the negotiations in the current weeks. Investors in the MENA region should watch these developments with interest.