EGYPT: Back from the brink 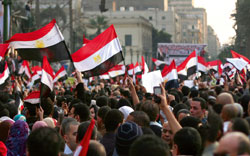 With plans for IPOs, economic reforms and a string of mega projects, Egypt seems to have bounced back. Orlando Crowcroft asks if the recovery can last.

When the Egyptian authorities announced earlier this year that the country would hold an economic summit in 2015 to launch 14 mega projects worth more than $100 billion, plenty may have reflected on how the country has changed in just a couple of years.

It was not so long ago that economic and political doomsayers were predicting the break up of the Arab world’s most populous state, which was shaken by daily street demonstrations and bitter political divisions. Meanwhile show trials of businessmen seen to have profited from the regime of former president Hosni Mubarak had investors running for cover.

The stability in 2014 has come at a cost, of course, including a return to dictatorial crackdowns on free speech and the mass jailing of members of the Muslim Brotherhood – including former president Mohamed Morsi – as well as western journalists and political dissidents.

But internationally, Egypt seems to have been rewarded for the coup that overthrew Morsi last year. The country has seen $20 billion in financial aid since June 2013, mainly from the Gulf States. President Abdel Fattah el-Sisi, who won an election earlier this year, which the Muslim Brotherhood were barred from, has won over western leaders glad to see a return to stability.

The Egyptian stock exchange has also recovered substantially over the past 12 months. By September it was up 41% on the year and although it took a hit in early October – losing 4% of its value in a single day – it is still 30% higher than at the start of 2014. There is now talk of initial public offerings (IPOs) being launched at the end of this year or early next, one by food producer Edita Food Industries, which is part owned by London-based private equity firm Actis, and another by an Egyptian subsidiary of UAE developer Emaar. The latter would be a vote of confidence in not just the stock market but in the construction industry, which all but ceased completely in the years following the revolution.

“Investors like a good turnaround story, and Egypt’s got it,” says Bryan Carter, lead portfolio manager for emerging markets debt strategy at Acadian Asset Management. “Price action in the bond and equity markets suggests that investors have returned.”

In a report in March this year, Acadian posited that political risk in Egypt’s sovereign debt market had all but vanished, and that credit was now well funded, bolstered by financial commitments from allies in the Gulf. It cautioned that in order to keep the momentum going, Egypt would need to catalyse new investment, which the government now appears to be doing with the 2015 investment conference.

Speaking in October, Carter said: “For investors and tourists, Egypt has not been this safe in a long time.

“And, although it comes at a cost for freedom of speech, el-Sisi’s heavy-handed tactics have instilled the expectation that there will be no near-term changes to the policy environment. Investors like stability.”

It goes without saying that Egypt’s economy has performed impressively this year, with GDP growth at 3.7%. Analysts suggest growth could rise to between 6% and 8%.

That growth has persuaded some Egyptian banks to invest in asset management, especially given an apparent keenness on the part of the Egyptian Financial Supervisory Authority (EFSA) to bring in reforms aimed at stabilising and developing Egypt’s financial markets.

Speaking in an interview in October, the EFSA chairman Sherif Samy told an investment conference that a potential area of growth was Islamic bonds.

A law to establish sukuk in Egypt was first passed by former president Morsi but was shelved after he was ousted in July 2013. Now the law is back on the books, albeit with the Islamic language toned down.

That move comes at the same time as a crackdown on unregulated lending by firms to investors who want to buy stocks, which had long been destabilising the equity markets in Egypt – largely because if the client’s portfolio lost value, the firm would sell off all the shares without consultation, creating volatility. The regulator is looking instead at making it easier for firms to get brokerage licences.

These moves have got banks in Egypt bullish that a more stable investor landscape could open the door to more demand for asset management. Egyptian bank EFG Hermes is one of those that has been working with regulators on the upcoming Islamic investment law, as well as reforms that would increase the options for pension funds wanting to invest in the Egyptian markets.

“We have seen improving inflows during the course of the year across different asset classes, so it is safe to assume that the Egyptian market and the asset management industry have become more attractive to investors after the country’s improved stability on the political scene coupled by major economic reforms,” says Nabil Moussa, EFG Hermes head of asset management in Egypt.

Moussa is bullish about the government’s upcoming project development plans and the effect they are likely to have on the Egyptian economy. He added that Egypt’s future will be clearer after the March 2015 conference, but said it is obvious the government’s priority is strengthening the private sector.

There will undoubtedly be a heavy GCC presence in future investment in Egypt. Indeed, many of the Gulf states’ biggest companies have always been active in Egypt. Even if some had their fingers publicly burned in the years following the revolution – at least one Dubai-based investor was convicted in absentia for his business dealings under Mubarak – it will be the Gulf, experts feel, that will be critical in Egypt’s development.

GULF NEIGHBOURS
“Political and economic support of Gulf neighbours has and will continue to allow Egypt to tackle difficult issues over the coming quarters pointing to further stability,” says Amer Khan, senior executive officer at Shuaa Asset Management. But with positive growth in the investment, private credit and all-important tourism sector, combined with stellar demographics of Egypt and pent up demand in multiple sectors, growth looks continue to be strong, says Khan. All this bodes well for asset management, giving investors a large range of options across multiple industries.

Others point out that this improvement is coming in a country that already has strong fundamentals and, unlike some of its neighbours, has a relatively mature and well-structured economy and investor landscape. As a result, Egypt could emerge from a tumultuous three years stronger, economically at least, than ever.

“It is important that this growth is happening on top of a solid layer of institutions and human capital,” says Carter, of Acadian Asset Management. “Egypt is not Iraq or Algeria, this is a country that was already renowned for its people and its potential before the regime change.”