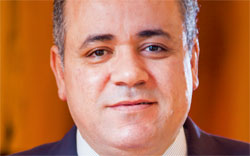 The Saudi authoritiesâ decision to open the countryâs stock market to direct foreign investment will be a boon for regional investors, says Reda Gomma of Mashreq Capital.

“For MENA this is very important,” says Reda Gomma, head of equities at Mashreq Capital. “Everyone wants to have exposure to the biggest oil exporter in the world.”

Gomma, who is based in Dubai, is explaining in concise terms why Saudi Arabia is an appealing investment destination. This country of 29 million has a dynamic consumer sector, an attractive banking sector and a petrochemicals industry that is the envy of the world.

No wonder, then, that analysts expect a big inflow of foreign capital once the Saudi stock exchange, the Tadawul, opens to direct investment from qualified foreign institutions in the first half of 2015.

Mashreq Capital’s Bahrain-domiciled Makaseb Arab Tigers Fund already invests in Saudi Arabia and has done for years. However, Gomma plans to increase the weight of Saudi equities in the fund’s portfolio to at least half as he prepares for the opening up of the exchange. This means the fund will match the weight of the Saudi market in its benchmark, the S&P Pan Arab Composite index.

But it is not only the opening-up process that makes Saudi Arabia an appealing equity market. Several sectors of the stock market are attractive. Take the consumer sector, for instance, which, unlike in a number of MENA markets, is well represented on the Tadawul. Saudi Arabia’s young, fast-growing population provides an assured source of demand for all kinds of consumer industries, from electronics retailers such as United Electronics to dairy firms such as Almarai.

Then there is banking. Gomma says Saudi banks offer a higher return on equity despite being unleveraged compared with other emerging market banks. In addition, the kingdom is still under-penetrated in terms of bank accounts.

Most importantly, there is oil. “The Saudis have a big petrochemicals sector which enjoys a competitive advantage over its global peers in terms of feedstock cost, which is much cheaper than in Europe or America,” he explains.

Importantly, despite the cheaper feedstock, Saudi petrochemicals firms such as SABIC are trading at a discount compared to global peers such as Dow Chemical. Gomma says this is an example of mispricing in the market. He hopes to profit from the discrepancy in the next two years, during which time he expects the price gap to close.

GOVERNANCE
The opening-up process ought to lead to other benefits beside foreign inflows. One improvement is around corporate governance. It is expected that as foreign investors such as asset managers and pension funds gain licences to invest in Saudi stocks, they will begin to influence Saudi companies to ensure they
provide better disclosure and ensure better management.

Gomma says this will have a financial impact too. A comparison of the S&P Pan Arab Composite, his fund’s benchmark, and the S&P/Hawkamah ESG Pan Arab Index, which measures the performance of the top 50 MENA stocks according to social, environmental and governance standards, shows that the latter index has outperformed recently.

This seems strong evidence that better managed companies offer more rewards to investors. An improvement in corporate governance in Saudi Arabia ought to benefit shareholders. In fact, the trend towards better management is happening elsewhere in the region too. Gomma has seen signs of improvement in Qatar and UAE-based companies since the two countries were upgraded to emerging markets by index compiler MSCI. “It’s still a short time,” he says, referring to the upgrades which were implemented in May 2014, “but we have seen signs of improvements. Corporate governance is getting better in the Middle East.”

The greater visibility, higher governance standards and credibility that the UAE and Qatar gained when they became emerging markets could soon come to Saudi Arabia too. Once the country opens to foreign investors, it will be firmly on the radar of MSCI and the other index providers for a potential upgrade.

“Given the big market capitalisation, we assume Saudi Arabia will have a 3-4% weight in the MSCI EM index after inclusion. That is another catalyst for the market to continue its upward rally,” says Gomma.

LIMITS
Are there reasons to be sceptical of the opening-up process? One note of caution is that the Saudi regulator, the Capital Market Authority (CMA), will impose caps on foreign ownership.

The draft rules also say that institutions must have a five-year investment track record and at least $5 billion under management to qualify, though the CMA may lower this to $3 billion at its discretion. The result of a 90-day consultation period on the rules will soon reveal exactly which caps and limits will be implemented.

These limits will stop foreign investors from increasing their Saudi exposure as much as some would like, and as a result, the gain for the Tadawul index may not be as large as some hope.

The limits, if they are too strict, may also prevent MSCI from awarding emerging market status to Saudi Arabia, an event that will not happen before 2017 at the earliest.

However, Gomma is not discouraged. “It’s a good thing for Saudi Arabia to open the market gradually. They do not want only hot money.”

Gomma says that he supports the regulator’s cautious, measured approach. If the CMA begins with a number of caps and limits, these can be eased gradually over time, thus protecting the stock market from the kind of volatility that struck the Tadawul in 2006, which led to a damaging stock market crash.

In any case, Gomma will not be changing his investment process as a result of the opening-up.

“It will push me to increase my weight to Saudi Arabia because this is an important event I cannot ignore,” he says. “But the strategy will stay the same: focus on good quality stocks. We generate our alpha from stock picking, not from momentum or market allocation.

“We will continue to be stock pickers,” he adds.