ZAWYA: Is the GCC ready for a correction?

After rapid equity gains across the region, even in troubled countries such as Egypt, analysts are wondering if investors should expect a correction. Data provided by Zawya.

Regional markets had another strong quarter between June and September, with the Dubai Financial Market building on its gains and rising just over 24% in three months – the best in the region. 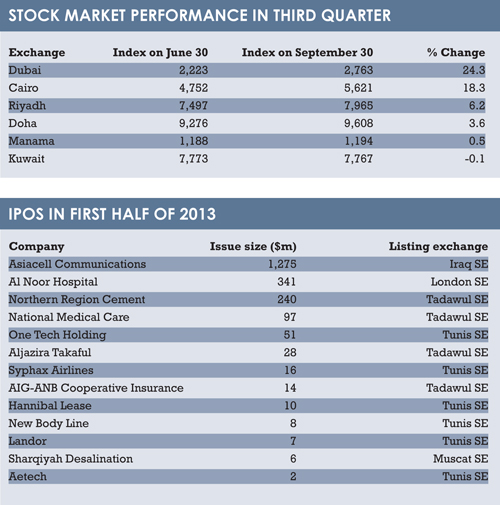 The big surprise was the Egyptian market, which shot up 18% as Gulf aid and loans steadied the economy. Army rule in the country seems to have provided some much-needed stability after the tumultuous tenure of the Muslim Brotherhood government. While none of Egypt’s major political problems have been settled yet, investors took advantage of the relative calm to pick up badly beaten stocks.

Elsewhere, there are signs that Gulf markets may be ready for a correction after a strong year. The Dubai Financial Market has risen 74% so far this year, but slipped recently as investors rotated to other stocks. Other bourses such as the Abu Dhabi Securities Exchange (up 45%), Kuwait Stock Exchange (up 34%) and Saudi Tadawul (up 22%) have benefited from high oil prices and government-led investments.

However, some, such as investment bank Global Investment House, believe the Gulf markets remain fairly attractive despite the surge in valuations. The bank notes that the six GCC markets trade in the range of 9.4 to 11.3 times one-year forward price to earnings.

“This is fairly below the three and five-year historic averages of 13.5 and 13.4 times, respectively, for the region as a whole. Valuation is also lower compared to similar frontier markets and key emerging markets,” says the bank. “Within GCC, we are in favour of Saudi Arabia given its current compelling valuations coupled with a robust earnings outlook for 2013.”

TOP PERFORMERS
After the struggles faced in the first half of the year, the third quarter was a fresh start for many fund managers, and some of the best-performing funds were those investing in troubled markets.

Three Egyptian equity funds were among the top five in terms of returns, exceeding 24% each. It is worth remembering that during the Arab spring, Egyptian funds struggled to maintain a flat performance. 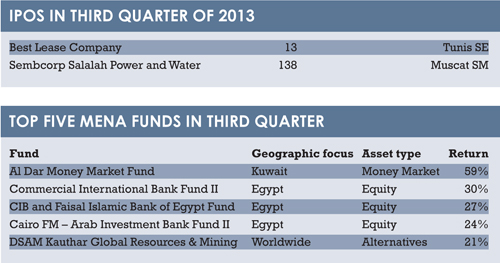 Ten funds were launched in the quarter, five of them sharia-compliant, and they included funds focused on Tunisia, Morocco, the GCC and Lebanon. Four of the new products were fixed income funds, two were balanced and two were money market funds.

GOING PUBLIC
The first half of the year was flush with 13 initial public offerings (IPOs) in the Mena region. The flood slowed to a trickle in the third quarter, with only two issues made. This was partly due to the summer coinciding with Ramadan.

There was one IPO in Oman from Sembcorp Salalah Power and Water, which started its public offer during September with plans to list its shares on the Muscat Securities Market, and witnessed a high demand from investors. The other new issuer in the third quarter was Tunisia’s Best Lease Company, a financial services firm specialising in ijara, or Islamic leasing.

The combined capital raised in the third quarter was $151 million, a fall of 58% from the total amount raised in the same period last year. Nevertheless, as the market entered the fourth quarter of the year, it regained its vibrancy with several IPOs launched or planned.