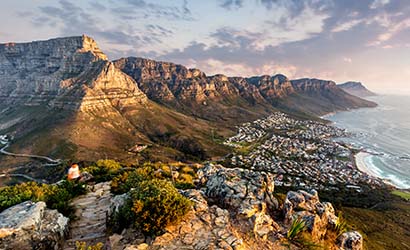 Companies from across the custody, asset management and administration sectors convened in Cape Town to discuss topics such as market growth, disruption and cyber security. It was less than a month since Jacob Zuma, South Africa’s controversial and widely criticised president, had given into public pressure and resigned. Although Cape Town was still suffering a severe water shortage, so that across the city, swimming pools were going green with disuse and toilets were unflushed, there was, besides a slightly pungent odour, a new sense of optimism in the air. There were great hopes that the new leader, Cyril Ramaphosa, would clean up the country’s administration and end a political culture tainted by corruption and allegations of “state capture”. It seemed an auspicious time to launch a financial industry conference. The Network Forum’s Africa Meeting, on March 12-13, aimed to bring together companies from across the investment, asset servicing and financial technology sectors. About 130 delegates gathered at the Table Bay hotel on the Victoria and Alfred Waterfront to hear views on the continent’s financial markets and discuss schemes and initiatives for the future. One of the key themes was disruption. Technology, in particular blockchain, is expected to have a transformative effect on financial industry networks. Some evangelists suggest vast swathes of the traditional custody business will be made redundant by the implementation of distributed ledgers. Speakers at the conference tended to a less radical view, arguing that blockchain technology would be implemented by incumbent firms working in partnership with start-ups. These industry experts further claimed the transition would be gradual rather than explosive. Nevertheless, there was widespread agreement that blockchain would have profound repercussions. Elsewhere, cyber security was on the agenda. As banking and financial networks become ever more digitised – and increasingly inter-reliant – the potential costs associated with hostile action by hackers rises to frightening levels. Delegates were in agreement that banks must increase their investment in defence against computer crime to avoid potentially catastrophic consequences. There was also a great deal of discussion about Africa’s financial markets and their potential. After a slowdown in recent years, economic growth in many corners of the continent is rebounding. Delegates expressed optimism that rising prices of commodities would help to sustain this recovery, especially for countries such as South Africa, which exports metals, and Nigeria, which exports oil. There were concerns about debt, however. On average, borrowing is outpacing growth in most African countries, meaning debt-to-GDP ratios are rising fast. Several delegates were concerned this trend was unsustainable, though they conceded that borrowed money, if allocated wisely, was an essential spur to development. The African financial industry faces numerous challenges, but there was a sense, at least in Cape Town, of a promising future ahead. ©2018 funds global mena