CUSTODY: A roadmap for change in the GCC 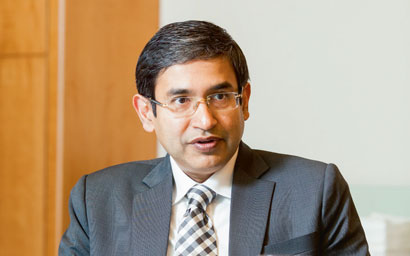 At the Middle East Securities Forum in March, Arindam Das of HSBC gave a checklist of reforms he says are needed for the regionâs capital markets. George Mitton finds out more.

Having notched up a full 10 years in the region, Arindam Das – the regional head of HSBC Securities Services since 2010 – knows better than most the intricacies of the Gulf custody landscape.

His speech at this year’s Middle East Securities Forum in Abu Dhabi was characteristically detailed, dealing with the oil price, the equity and debt markets and the opening of the Saudi Arabian stock exchange to foreign investors.

Perhaps the punchiest part of his presentation was a list of reforms he wants to see to make the regional markets more efficient and prosperous.

Funds Global MENA spoke to him after the event to hear what these reforms require.

If developed markets are a good guide, more institutional investment would mean more liquidity and less volatility. The problem is many Gulf-based institutions are not active traders, preferring to buy equities and hold them. Das says regulators should encourage local institutions to hire fund managers to trade for them.

PASSPORTING
Another way to ‘institutionalise’ the markets is by encouraging more trading by professional asset managers. The problem here is that the mutual funds market in the GCC is small. “If you take out Saudi Arabia, it becomes really small,” he says.

To help the funds market to grow, regulators could create a regional passport scheme that would allow a fund registered in one GCC country to be sold in all GCC countries.

“Europe has been successful with passporting,” he says, referring to the long-running Ucits scheme. “If you open the boundaries, everybody benefits.”

STOCK LENDING
For the capital markets to grow, there must be more investment opportunities. “You need to keep increasing the stocks,” he says. “IPOs [initial public offerings] breathe new energy into the market.”

Institutions could also boost trading activity by lending their stocks to fund managers in exchange for revenue. Most regional exchanges do not allow stock lending. In the case of those that do, it is allowed only when there has been a failed trade. “The market is being deprived of liquidity because securities are lying idle in the investor’s account,” he says.

SHORT SALES
Another way to energise the markets would be to allow covered short sales. In the past, short selling was banned because there was no mechanism to deal with a sale of shares that couldn’t be delivered. Now, in the UAE and Qatar at least, there is a mechanism. Das says regulators should relax the ban, as well as the cumbersome requirement for each trade to be pre-validated.

PLEDGING
Das would also like to see more legal safeguards to give banks the confidence to lend money in exchange for stock as collateral. “Investors here sit on huge amounts of stock,” he says. “They want to borrow, but banks are cagey as to whether they can sell the stocks and recover their money – because of an inadequate pledging mechanism.”

LEGACY SYSTEMS
The move to full delivery-versus-payment (DVP) processing in the UAE and Qatar has helped improve the market infrastructure in these countries. “Other countries should do the same,” says Das. “Especially Kuwait.”

He says regulators should also abolish the dual account structure, which requires investors to have both a custody account and a trading account. This is a legacy system, he says, that no longer serves its purpose.

Das is also dissatisfied with the way the current system requires participants to reject an incorrect trade. If a participant is on leave, say, and cannot give the rejection in time, an incorrect trade will take place. Instead, the system should require positive confirmation of all trades before they proceed, he says.

OUTSOURCING
For brokers, there would be a great benefit in permitting back-office outsourcing. “A broker should focus on execution and should be able to outsource custody and clearing to a specialist provider,” he says. This would allow brokers to turn the fixed cost of maintaining a back office into a cost that varies according to how many trades it executes.

EFFICIENCY
Then there is a different type of passporting that would be valuable: a GCC-wide account. With the exception of Saudi Arabia, the GCC countries have very similar procedures for opening a capital markets account. Why not harmonise the procedures so that participants have to register just once, in one GCC market, before trading in all markets? “It would be like a Schengen visa,” he explains.

Another laborious practice is the paying of dividends by physical cheques. Das would like the exchanges to put in their listing agreement that a public company has to pay its dividends to its depository, which would then dispense them to shareholders electronically. ACCOUNTS
One of the key areas requiring new regulation is omnibus accounts, says Das. A big institutional investor may own a large pool of assets in the region that are managed by several independent fund managers. In the current market mechanism, the investor’s assets are treated as one entity. It would make more sense to have a multi-account structure in which each part of the pool is treated separately.

Das would also like to see what he calls a “risk-based approach” to know-your-client (KYC) and anti-money-laundering controls, so that, for example, a well-established global asset manager has a quicker process than a relatively unknown one.

“Those sorts of pools of assets are currently not custodised,” says Das. “The investor does not get the protection that custodians are able to give.”

Whether any or all of Das’s suggestions are implemented in the coming years remains to be seen.