LIBOR SCANDAL: The player or the game?

The authors of The Fix, an exposé of the Libor rigging scandal, deserve praise for a gripping tale of greed and incompetence, says George Mitton. The London Interbank Offered Rate (Libor), a measure of what it costs banks to borrow from one another, has been called the world’s most important number. No wonder, then, that outrage followed news that traders and bankers had manipulated it. Libor is everywhere. It underlies trillions of dollars of investments from mortgages to bonds to mutual funds. Yet The Fix, an absorbing book from journalists Liam Vaughan and Gavin Finch, is less about the number itself and more about the individuals who sought to rig it – how they did it, why they did it, and how they were caught. It is a compelling tale of greed and, ultimately, a scathing critique of a flawed mechanism that was ripe for abuse. RAIN MAN
The anti-hero of this drama is Tom Hayes, a trader who was among the most ruthless and successful at manipulating Libor. 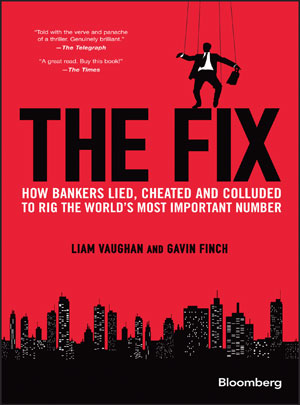 Hayes, as described in the book, is a fascinating character. A gifted mathematician with Asperger’s syndrome whose colleagues compared him to Dustin Hoffman’s character in Rain Man, Hayes was an outsider in the debauched culture of the trading floor. While his colleagues downed champagne and frequented strip clubs, Hayes “got drunk on a couple of pints and preferred KFC to fine dining”. What really excited him was the thrill of making money. Obsessive and fiercely competitive – he apparently dreamed of interest rate swaps – Hayes gained a reputation as one of the smartest, bravest traders in the yen derivatives market. From the Tokyo offices of UBS and later Citigroup, he banked millions of dollars of profits for the banks that employed him. Hayes’s success was no lucky accident. Through bribes, intimidation and the force of his personality, he influenced the individuals – both at his own bank and at others – whose job was to submit their bank’s daily Libor rates. By moving the overall rate by as little as a basis point, he could make as much as $750,000 on his own positions. SCALE
The Fix is the story of Hayes’s undoing, the result of an investigation into rate-fixing started by a US regulator, the Commodity Futures Trading Commission. A cat-and-mouse structure familiar to thrillers gives the book its page-turning momentum. You know Hayes gets caught eventually, but it is thrilling to watch the net close around him. Like an intelligent thriller should, The Fix asks some uncomfortable questions. Is Hayes the villain of the piece or, perhaps, the victim? In his favour, it appears he did what many others were doing, albeit more successfully and less discreetly. The question hanging in the air at the end of the book, when he is sentenced to 14 years in prison, is whether Hayes has been made a scapegoat for institutional wrongdoing. As Hayes himself testified, his managers appear to have been aware of his techniques and raised no fuss about them so long as he kept bringing in the money. An email produced in court from a senior employee at UBS refers to Hayes’s “good connections with Libor setters in London”, which sounds suspiciously like a veiled reference to his methods. The context to this tale gives more ground for ambivalence. Libor, set up in the gentlemanly world of 1960s British banking, was clearly open to abuse. The banks that set the rate were also members of the body overseeing it, the British Bankers’ Association. Conflicts of interest were built in. Indeed, when lending dried up during the financial crisis, there is evidence the major banks systematically under-reported their Libor submissions by as much as 40 basis points so as to disguise their vulnerability. This was the scandal that destabilised Barclays and led to the sacking of its charismatic chief executive, Bob Diamond. In this context, write the authors, Hayes “saw his efforts to tweak the rate by a quarter or a half a basis point as small beer”. Indeed, though the authors are unsparing in their account of Hayes’ crimes, they seem to reserve the greatest ire for the British Bankers’ Association. The association’s Libor manager, John Ewan, comes out particularly badly. “Tall and gawky with bulging eyes and prominent sideburns”, Ewan is portrayed as lacking the experience or training to do his job. When Ewan testifies in the trial of Hayes, “what emerged over the next four days was an institution that was comically inept, almost certainly dishonest, and which ultimately bears as much responsibility for one of the worst episodes of market abuse as any trader”. MORE TO COME
After a review in 2012, the British Bankers’ Association lost its responsibility for managing Libor, which is now overseen by a subsidiary of the New York Stock Exchange. Libor-setting has been declared a regulated activity and it is a standalone crime to attempt to manipulate it. This ends a bizarre situation in which one of the world’s most important benchmarks “resided in a kind of regulatory wasteland”. That ought to be the end of it – though, as the authors write in their epilogue, journalists and regulators who probed the Libor scandal have discovered evidence of rate-fixing elsewhere. Traders seem to have tampered with the Euro Interbank Offered Rate (Euribor), while bankers have conspired to fix foreign-exchange rates in their favour, a scandal that has already cost the banks nearly $10 billion in fines. It’s hard to resist the conclusion that competitive and ruthless finance workers will push the limits. Strong, effective regulators are needed to rein them in. METAPHOR
This book is well worth reading. Its authors have structured a lot of difficult material into a taut and concise 174 pages, littered with pithy quotes and observations that are clearly the product of months of reporting. It is no surprise that a review on the back of the book compares it to Michael Lewis’s Liar’s Poker, another gripping and unflattering portrayal of traders. However, while Lewis’s genius was to make the arcane world of high finance accessible to the average reader, the authors of The Fix have not quite achieved the same feat. There are few metaphors as memorable as, say, Matt Taibbi’s description of Goldman Sachs as a “great vampire squid”. Instead, Vaughan and Finch have stuck to the facts. That’s fine, but for a book so strewn with numbers and technical language, there is a risk its readership will be limited to those who are already familiar with its subject. That is a shame because, as the authors explain, the fixing of the world’s most important number affects nearly everyone on earth. ©2017 funds global mena This article first appeared in Funds Europe