INTERVIEW: “We are not being punitive” 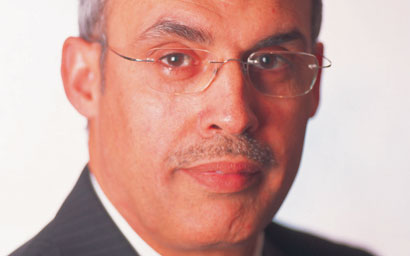 The governor of the Central Bank of Bahrain says new rules on pay are fair, admits he is worried about Bitcoin, and promises more bank mergers in the coming year. George Mitton reports.

When Rasheed Mohammed Al Maraj, governor of the Central Bank of Bahrain, took the podium at the GCC Financial Forum in February for a question-and-answer session, he knew in advance what the hottest topic would be – the recent regulation on financial workers’ pay that was designed to rein in bonuses.

“Please read the whole rule in full,” he begged, attempting to preempt the audience. “Many of you who complained did not read the full rules. It is a big difference but it is for the good of the institutions and the financial community.”

As expected, several questioners wanted information about the regulations – would they make Bahrain’s financial services sector less competitive by making it harder to attract talented workers from overseas?

“The international community want to see a properly regulated environment,” said Al Maraj. “We do not think we’ve been punitive in the rules. They are not different from what you have in London and New York and the other financial centres. Probably the rules in those centres are more intrusive.”

Al Maraj’s response did not entirely answer the audience’s questions. As more queries came his way, the governor sighed and patiently reminded his audience that three years ago, as the financial crisis played out, the people of Bahrain were calling for the regulator to act – to control pay that was then seen as excessive.

BONUS CAPS
In fairness to Al Maraj, who has been governor of the bank since 2005, he is not the first regulator to face complaints from well-paid financial professionals about an attempt to curb bonuses. Regulators in Europe have come in for similar criticism.

Nobody likes to feel their pay is being capped, especially not employees of investment banks and other financial firms, and attempts to limit systemic risk by removing some of the more excessive incentives have generated far more controversy than other regulations central banks have published.

But Al Maraj is clear: the benefits of being transparent about pay outweigh any negative feedback from the industry.

In a way, Al Maraj’s attempts to meet international norms – he says he is following the lead of the Basel Committee on Bank Supervision – is characteristic of Bahrain’s approach to financial services. The first financial centre in the Gulf, Bahrain is also often said to be the best regulated. Asset managers frequently assert that the rules for mutual funds in Bahrain are clearer than in other Gulf jurisdictions – this is one reason why so many funds are domiciled in Bahrain, even if they are actually managed elsewhere.

It is unfortunate, then, that Bahrain has attracted so much negative coverage in recent years. First there was the uprising of disillusioned, predominantly Shia Bahrainis during the Arab spring, who called for more political freedom and an end to the monarchy. Bahrain continues to attract criticism for its response to the uprising, in which many people died – a sense of injustice continues to rankle among the country’s Shia majority.

“There are a lot of headlines that are not really reflecting the situation in Bahrain,” Al Maraj said during an interview after his conference appearance. “We have weathered the storm of the Arab spring in general and our financial services sector maintained its integrity.”

More recently, Bahrain was shaken by the plunge in the oil price. With limited oil reserves and less money in its coffers than its wealthy neighbours, such as Saudi Arabia, Bahrain has been singled out as the most vulnerable Gulf country in a low-oil-price environment. In April 2014, Deutsche Bank suggested the break-even price for Bahrain’s budget was $134 per barrel of Brent crude. The price is now about $60.

Al Maraj admits he is concerned about the effect of the low oil price but adds, “let’s not panic”.

“Remember we have been in this cycle before,” he says. “We learned a lot of lessons. But that does not mean this is an opportunity for the banks to be complacent. We are a commodity exporter. The fluctuation in commodity prices has affected us and we have to be prepared for this.”

There are other, more esoteric threats which concern central bankers like Al Maraj. In the conference, one questioner asked about the effect of Bitcoins or other cryptocurrencies. Al Maraj said this technology potentially posed a systemic danger.

“I see Bitcoins diminishing the role of central banks to control money,” he said. “That’s why, for the central bank to maintain an orderly operation, these will constitute a threat.”

SOLUTIONS
What can the central bank do in this difficult environment? The same things it has always done, he says. He notes that many of the problems facing Bahrain – the same problems that caused ratings agencies such as S&P to downgrade Bahrain’s sovereign debt rating – are beyond his control. A central bank cannot control the oil price, for instance. What he can control, he says, is the quality of regulations and the soundness of the banking system. He can attempt to influence other factors, too, such as corporate governance or the level of incentives in the financial sector.

Within this limited remit, Al Maraj is sanguine about what should be done. He says he wants more consolidation in Bahrain’s banking sector. “I need to see stronger and bigger banks,” he says. He promises there will be at least one merger this year, though he declined to say which banks were involved.

Al Maraj had other tough messages for the financial sector in Bahrain. One concerned its handling of customer complaints. “In Bahrain, the financial community failed to address this issue,” he says. Al Maraj says he personally reads every complaint that comes to the central bank. Banks, asset managers and insurance companies in Bahrain should do the same with every complaint they receive, and act efficiently to respond to their customers’ grievances. This is important because the financial industry must earn the trust of individual customers, even those with relatively small accounts.

“If the man with 500 dinars in the bank has a problem, I need someone to address his complaint,” he says. “I hope people here will do something about it.”