The revival of a UK government sukuk points to a trend for new issuers in the Islamic finance market, potentially closing a large supply gap. Orlando Crowcroft reports.

When the British government said it would launch a sukuk in 2007, the Islamic finance industry waited with bated breath. Here was a major step towards the internationalisation of Islamic bonds, which were confined to a handful of countries in the Middle East and Asia.

Then the financial crisis happened and the UK’s plans for the £2 billion ($3.3 billion) issue were quietly shelved. With the collapse of the Lehman Brothers and the beginning of the recession, Britain had bigger issues to worry about than tapping wealthy Muslim investors to fund UK-based infrastructure projects.

So the revival of the UK sukuk at the end of last year – albeit as a far tamer £200 million, five-year offering – was greeted with excitement in the industry. With demand far outweighing supply in the global sukuk market, Islamic banks are hoping Britain’s offering leads the way for other financial hubs, including Singapore, Hong Kong, Luxembourg and Germany, to issue sukuk, too.

New issues could arise from a number of other new sources. New regulations in Morocco will this year allow sukuk for the first time. South Africa’s sovereign wealth fund is in the process of issuing its first sukuk. Islamic banks have opened in Oman and could be set to open in Germany. Turkey is also seeing a huge government push towards Islamic bonds, having launched its first in 2012.

“They are all looking at ways of attracting Middle East capital to their various projects,” says Nigel Denison, head of wealth management and treasury services at Bank of London Middle East (BLME). “A lot of infrastructure finance will need to be done in all sorts of places over the next few years, and as long as you have real assets backing the deals they could be sukuk-able.”

In its January 2014 report on the global sukuk market, rating agency Fitch Ratings said that despite a drop in issuance of 12% last year, 2014 is expected to be a bumper year for sukuk. Qatar is due to issue some $3 billion of Islamic bonds to help fund its ongoing development programme. Government spending in other Gulf states could be funded with these instruments, too.

Meanwhile, strong investor demand is likely to attract debut issues from Islamic and non-Islamic nations in 2014. A recent issue from the Nigerian state of Osun is an example of how sub-Saharan African countries are looking at Islamic finance as an alternative to conventional bonds.

“Although all these issues would be relatively small, they will be a significant step in broadening the range of debt available to investors,” said Fitch, in a January 2014 report.

CONSTRAINTS
The range of issuers available to investors has always been a sticking point for the expansion of Islamic bonds, with new sukuk issues generally oversubscribed. Sayd Farook, global head of Islamic capital markets for Thomson Reuters in Dubai, puts the supply gap at some $140 billion, which could rise to $240 billion in three or four years’ time.

The shortfall raises the question: what has held Europe, south-east Asia and other Middle Eastern states back from issuing sukuk, given that the demand has been robust for so long?

“The cost is a constraint,” says Farook. “When thinking of tapping the markets, either sovereign or corporate, the first thing you want to figure out is whether the benefit of issuing a sukuk is going to outweigh the cost of it.” 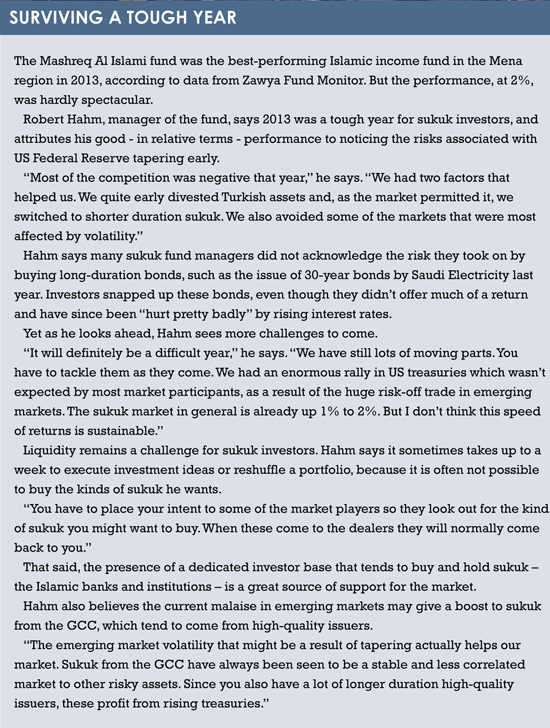 Another hurdle, particularly in Europe, is a general controversy about foreign ownership of domestic assets. Unlike a conventional bond, which provides some anonymity to its buyers, sukuk investors can reasonably be supposed to come from the Middle East or Islamic countries. For a country such as the UK, there can be a public perception that the government is selling off the silverware to foreign investors, which may not have the UK’s national interests at heart.

“The irony is that this doesn’t only happen in the UK,” says Farook. “In Egypt it was one of the biggest objections raised against the Muslim Brotherhood, who tried to introduce legislation that would allow sukuk. It was said they were going to sell Egypt’s stuff [to foreign investors].”

As well as new markets and governments looking at sukuk, it is hoped that global corporates will enter the fray. There was much enthusiasm when GE Capital, the finance arm of US conglomerate General Electric, launched a $500 million sukuk in 2009. The firm suggested more was to come, but none did.

“You would expect that more major corporates would come to this market to issue, because what the industry needs is a bigger range of high quality issuers across a range of credit ratings and ideally across a range of industries,” says Denison, of BLME.

Indeed, demand for liquid, sharia-compliant assets in the global markets is massive, says Farook, and will only increase.