Equity markets have boomed in the first weeks of this year, suggesting regional equity funds are set for good performance.

With global investors fired up on news that the Republicans in the US were changing course on the debt ceiling crisis, regional markets got a boost at the start of the year.

Global markets were roaring, with Dubai leading the way. The Dubai Financial Market General Index rose 10% by January 21, making it among the fastest growing markets in the world. The Abu Dhabi exchange climbed 5.6% in the same period.

Both UAE markets outperformed the S&P GCC index, which rose 3.8%.

Saudi Arabia, the region’s largest market, lagged regional and international indices. The country’s stock exchange, the Tadawul, rose 2.7% in the first three weeks of the year, while Kuwait’s rallied 4%.

With thoughts of a $16 trillion debt crisis pushed back to a distant day, investors are optimistic that a weakened Congress will not pursue policies that could derail the US economic recovery.

And there is good reason for investor optimism. After years of global economic lethargy and anaemic growth in Europe and the US, green shoots of recovery have sprung up across the world.

While Europe continues to trundle along, the latest meeting between EU finance ministers suggests there is broad agreement on key flashpoints such as Greece and the bailout fund.

“On Greece, we noted that everything is progressing as we decided in December,” said Wolfgang Schaeuble, the German finance minister. “So we can agree the payment of the next tranche after the fulfillment of the milestone of the income tax. We especially welcomed Greece’s announcement that there would be another tax reform in May, so the process of implementation is progressing step-by-step.”

China continues to reveal mixed economic data, but its oil imports are on the way up, which should please Middle Eastern crude exporters. The Asian giant’s oil imports stood at 5.6 million barrels per day in December and were around 8% higher during the fourth quarter than in the same period in 2011.

This is good news for producers in the Organization of the Petroleum Exporting Countries (OPEC) that are worried about an oil supply glut caused by non-OPEC producers ramping up output.

With investors pouring money into global equity markets this year, conditions seem ripe for a major rally ahead. Of course, it is unlikely to be a smooth ride.

FUNDS
Saudi and Emirati asset management companies accounted for the five best-performing Mena funds in the last quarter of 2012, according to the Zawya Funds Monitor. The Japan Stock Fund from Riyad Capital was the best performer with a quarterly return of nearly 14%. The fund is domiciled in Saudi Arabia but invests in equities listed on the Tokyo stock exchange.

Next was the Iraq Opportunity Fund from Invest AD with 12% and the Rasmala Palestine Equity Fund from Rasmala Investment Bank with 10%.

The Al Arabi European Equity Fund and the Samba Capital Asian Equity Fund were fourth and fifth with a return of about 8% each.
On average, returns in the last quarter of the year were significantly higher than those of the preceding three months.

As many as 13 funds were launched in the quarter, most of them fixed income products. Morocco was the most active market for fund launches in 2012. It launched 24 funds out of a total of 73 funds in the Mena region.

IPOS
The fourth quarter was the last chance for initial public offerings (IPOs) in 2012, but ended with only one new issue. There were 11 IPOs in total during the year, compared to 14 in 2011. However, the capital raised in the year was $1.7 billion, more than double that of 2011.

Saudi’s Dallah Healthcare Holding Company opened its doors to Saudi investors in November, raising $144 million in an IPO managed by Samba Capital and Investment Management. Since its listing on the Saudi stock exchange on December 17, 2012, Dallah Healthcare has showed a successful return on its IPO price. Its share price more than doubled in its first month of trading.

Two IPOs that took place in the third quarter of the year listed their stocks in the last quarter, and both of them showed positive price returns, a fact that will reassure potential issuers and investors.

Compiled by the Zawya team of analysts 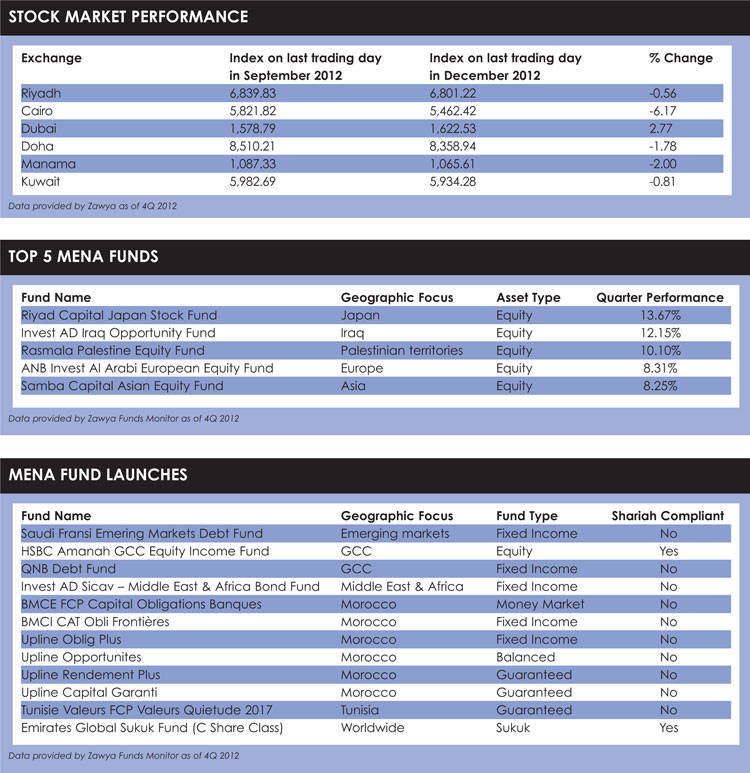