The closure of many local brokerage businesses in the Mena region means custody is less available. Though at the same time international custody banks are boosting their offerings for homegrown investors. But Nick Fitzpatrick finds cost is a hindrance to their expansion.

The closure of many Gulf brokerage houses means there are fewer businesses now offering custody services to local investors, whose intra-regional investments are a prized asset for international custody banks.

The number of brokers that have closed their doors in recent times is in the region of 50, say market participants.

Middle East-based investors tend to give brokers the custody of their assets that are invested in the region’s capital markets rather than use a separate custody bank. In European and American markets it is standard – even compulsory in many cases – to give custody to an independent custodian.

One of the latest brokers to close was Al-Futtaim HC Securities (AFHCS) in Dubai.

HC Securities and Investment, which owned AFHCS along with the Al-Futtaim Group, is an investment bank with a custody operation and remains in business. But the subsidiary’s experience reflects brokers’ difficulties in the region.

AFHCS had offered a range of brokerage services in the three financial markets of the United Arab Emirates (UAE) for both retail and institutional clients. It had offices in Syria and the UK. But the firm experienced a very difficult environment during 2009, 2010 and 2011 following the global financial crisis.

Strain in Middle Eastern markets has had a considerable impact on local brokers.

Mike Cowley, head of direct securities services in the Middle East and North Africa (Mena) at Deutsche Bank, says: “The number of local brokers in the region has come down from around 100 to about 50, and just 30 of those have a transactional activity.”

Deutsche Bank is one of the Western names looking to build market share in Mena. So is Citi. Both have seen significant developments in their businesses over the past two years as they seek to challenge the hegemony of HSBC’s securities services division. It has the largest footprint among international investors investing into the region and among Middle East investors investing regionally or outwards into global markets. Standard Chartered is also active in the area, as are American custody giants State Street and BNY Mellon.

The april of progress for the custody bank model is largely in step with the pace of modernisation in Mena capital markets. But with a lack of new-fangled, exotic investment activity in the region, the custody business is largely limited to providing a basic custody and administration exercise for investors who invest in the region’s markets.

Vanilla services
Arindam Das, regional head of HSBC Securities Services in the Middle East, says: “Most markets do not allow short selling, stock lending or derivatives. Custody services in the region are fairly vanilla,” and he cites settlement, income collection and foreign exchange as some of the regional services.

He says that local markets are talking about permitting stock lending, especially the UAE and Qatar, but only in certain circumstances, such as where a buyer is affected by a failed settlement.

It is in value-added services around basic settlement and custody that custodians make their money in other markets. Without these profitable lines of business subsidising core custody it looks like the banks will have a tough time competing with the local brokers who do a custody service for free.

Catherine Doherty, an asset management consultant in the Gulf and global chief executive at Investit, says: “Custody fees [in the Mena region] can range from 45 basis points and drop through 20, which is nowhere near the 0.1 basis points charged in the developed world.”

This is partly because it can be very expensive for custodians to connect to exchanges and to process trades, she says. “Meanwhile, the broker will do their version of custody for free.”

Das says: “Many local investors have not used a custodian for their Mena investments but have used custodians for international portfolios.”

Yet back in the local market, though cost is an obvious impediment for global players looking for market share, are there other factors that investors should consider?

Das says HSBC has started to educate clients about the possible pitfalls of leaving assets with brokers, saying that clearing and safekeeping of assets are ”the domain of custodians”, not brokers. A corporate actions service is another.

For Investit’s Doherty, though, the corporate actions issue appears less straightforward and only adds to the difficulty with marketing a standard custody model.  “There is no formal feed of corporate actions, and no real concept of proxy voting,” she says.

Point of issue
The issue may be one of modernisation again, and reformers – custody banks among them – recognise dangers in moving too quickly.

However, there is one sticking point that gets right to the heart of what custody is about – the safe-keeping of assets – and that is the dual account structures in operation. In essence, this is the need for a trading account separate to a custody account, and it has been a feature in holding back UAE and Qatar from gaining emerging-market status in MSCI indices.

With the system at present, sources say it is possible that assets could be moved from a custodian account to a trading account without the client knowing, so custodians cannot offer the full custodial guarantee.

The delivery-versus-payment model goes some way to eradicating this risk, but not far enough, claimed one banker.

Gulf states realise international players want more protection, their existing systems have not let them down so far.

They would not want to make all the changes put into place only for there to then be a fail. 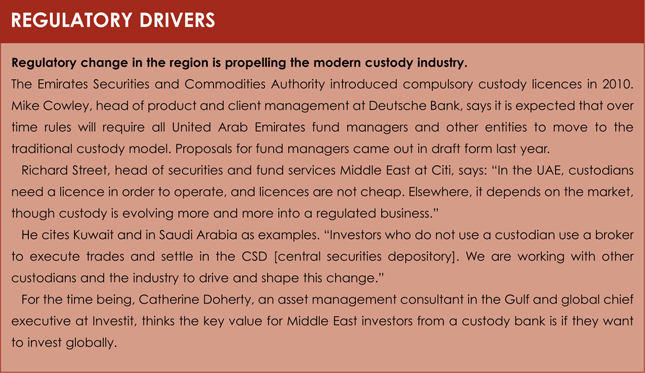