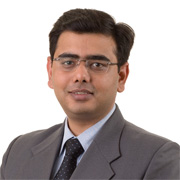 Nicholas Pratt talks to the QFCAâs Shashank Srivastava about Qatarâs ambitions as a financial centre for the Middle East and the plan to develop local expertise.

Qatar is one of the fastest growing economies in the world, which given the fact that it is the wealthiest country in the world as measured by GDP per capita, should not be surprising. However, simply converting a wealthy population into a thriving and sustainable centre for international investment is not straightforward.


The Qatar Financial Centre was established in May 2005 to help with this transformation and to attract international investment to the region. In those five years more than $140 billion (€114bn) has been invested to create an infrastructure capable of supporting a banking, insurance and asset management industry that can endure over the long term and also establish a market that involves local players as well as the predictable list of global names.


He cites that between 17% and 20% of the firms licensed by the authority thus far have been domestic and this is a trend he is keen to develop. On the international front, Srivastava is encouraged by the fact that the international funds setting up in Qatar have a far better and more granular understanding of the region and how it differs from other fund centres in the Mena market. He puts this greater understanding down to a number of factors.

Reliable economy
“The first reason is the financial crisis, in that it has made investors more focused on the details of the Gulf region. And here at the QFCA we have put a lot of effort into making them more aware of the Qatar market. Finally, there is Qatar itself. The strength of the domestic market and the reliability of the economy have both been very encouraging and it has meant that we have not had a difficult job to promote the region.”


Just how easy it has been to promote Qatar’s investment market has been underlined by the success of the region’s recent bond issue, says Srivastava. “Qatar had the largest emerging market bond issue ever seen,” he says. “It was oversubscribed by 24 times. Qatar did not even have to do any road shows to promote it, just two investor calls.”


And while there may be an element of competition between all the different regions in the Gulf, there are also increasing signs of cooperation in terms of developing some common regulatory and monetary standards, starting with the idea of a single, super regulator for the Gulf region. In addition to the single regulator concept, there is also talk of a single currency or at least some form of monetary union for the region and, in more concrete terms, a collective will to develop some corporate governance guidelines that can be adopted across the region.


The corporate governance initiatives will be vital to all of the regions within the Gulf market in their bid to attract international investment and to promote an image of stability and sustainability. The rapid growth of areas like Dubai has generated a perception that the Gulf region may have an image of instability. To some observers, the recent demise of the Dubai World property group only underlined the fragile bubble in which this market has germinated.


In addition to whatever Gulf-wide collaborations may be taking place between the different financial centres, as far as Srivastava is concerned, Qatar should be recognised as one of the fundamentally strong economies in the region. “Qatar has maintained its credit rating and risk ratings. Its growth is not based on a property boom,” says Srivastava. “It is gas and not oil in Qatar so there is no spot market and we deal with long-term contracts between 20 and 30 years. It is a market built on real assets.”


In addition to Qatar’s strong fundamentals, Srivastava says that the QFCA is also investing heavily in technology, something that he says has long been ingrained in the psyche of the region. In the 1990s people thought it was a bit of a gamble to borrow money from the international market to invest in technology, but it has paid off. However, Srivastava says he is fully aware that the technology market does not stand still for very long so the investments made in the 1990s are not one-off payments. “We have the latest technology but we know that today’s cutting edge is tomorrow’s legacy system so it is a case of continual investment.”


Qatar’s investment industry received a major boost in 2009 when the country’s exchange (originally conceived as the Doha Securities Market in 1995) entered into a partnership with NYSE Euronext and relaunched as the Qatar Exchange (QE). Under the conditions of the partnership, NYSE Euronext took a 20% stake in the exchange, and in return the QE was able to tap into the up-to-date technology infrastructure of NYSE Euronext.

International best practice
Consequently, the QE is preparing to launch its new UTP platform in the third quarter of 2010 which it hopes will bring it up to international best practice in terms of technology and infrastructure as well as regulation. And this in turn will help it to continue its successful ETFs business as well as its future plans to grow successful fixed income and derivatives markets.


When a fledgling exchange in an emerging market calls in an international heavyweight like NYSE Euronext, one concern is that international executives are jettisoned into positions of power and any short-term success generated by the project comes at the expense of the local workforce and the local banks.


However, Srivastava says that the deal with NYSE Euronext and any other efforts to bring in international players is underpinned by the QFCA’s strong philosophy in getting the locals involved in the industry. He points to the development of The Qatar Finance and Business Academy, which runs a number of courses in financial services aimed at the next generation of locals that will hopefully bolster and develop the financial services of the future.


“We are investing a lot of time and effort in the education process. For example, the Qatar Finance and Business Academy is the first such institution in the region to have a full simulated trading floor. We think this underlines our commitment to making Qatar’s financial services industry a fundamentally different place and something that will last in the long term.”


Srivastava also hopes that the investment in education will help to build a specialised labour force, high on expertise that can serve as the foundation for the asset management industry of the future. “We want Qatar to be an asset management hub for the Mena market and one where the investment sticks in the region rather than having international firms coming over and raising capital and then taking it out as soon as it generates a return.


“The first step to achieving that is growing the expertise, followed by the technology infrastructure and then the various service providers, such as legal and accounting,” says Srivastava. “This will all take time to develop but we are in it for the long haul.