It’s who you know 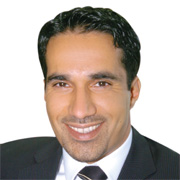 One reason why the economic future of the world is tilted in favour of emerging markets is because of the youthfulness of their populations. This demographic wave permeates right across society, including corporations where it reaches up to senior management.


Alan Nesbit, fund manager of the First State Latin America Fund, sees how the world is changing. “You often have very old stodgy management in mature countries [but] many companies in emerging markets are run by very savvy people,” he told Funds Europe recently.


So if Tariq Al-Samahiji, the Middle East & North Africa (Mena) chief executive of BNP Paribas Investment Partners, is anything to go by, the trend is discernible in the Gulf also. The 38 year old was born in Bahrain and controls BNP’s Mena investment management business from the 50th floor of a BNP building in Bahrain Financial Harbour, Bahrain’s financial centre.


BNP Paribas Investment Partners is currently a force to be reckoned with in the Gulf. It has achieved two feats that many managers dream of. First, it has raised several billion dollars from Middle Eastern sovereign wealth funds. Secondly, through a joint venture with Saudi Investment Bank (SAIB), it has penetrated the Saudi Arabian wealth market, a Holy Grail for Gulf fund managers.

Rise to the top
Al-Samahiji went to BNP Paribas’ investment management business in January 2002 as ‘head of sales’, he says. He became CEO in 2005.


The business is mainly built with institutional money, says Al-Samahiji. The firm has around US$14bn (€10bn) of assets under management in the region and Al-Samahiji says that, in euros, 90% of this is from sovereign wealth funds. Total sovereign assets are “north of €9bn”, he says.

Relationship building
All experienced asset managers in the Gulf know that establishing a relationship with sovereign funds is a long, slow build. Al-Samahiji acknowledges that the brand name of BNP Paribas bank, which has been 30 years in the region, helped gain business, but he also says: “I have my own contacts in the industry.”


Al-Samahiji previously worked at JP Morgan Asset Management (JPMAM) in the Gulf where he nurtured some of these contacts. He says JPMAM is another one of the foreign firms that is “doing well” in the area.


But as well as his contacts books, Al-Samahiji’s knowledge of etiquette also appears to have attracted BNP Paribas.


“Asset managers need to hire people who understand the business,” he says, and: “Do not think you can go right to the top and achieve what you want to achieve by bypassing other people.”


Like everywhere else, clients also want security, track record and a repeatable process, he says.


Al-Samahiji would not discuss how sovereign funds currently view their investments. All he would say is that all funds are different. Nor would he reveal what the split of BNP Paribas’ clients’ investments are between Gulf and international markets.


In 2008 the firm established itself in the regional private equity market with the Mena Private Equity Fund I, a Bahrain-domiciled collective investment vehicle. This is still gathering money and is backed by the bank parent with $75m. It invests in companies owned by families and institutions.

Local presence
Managers wanting access to the region fret about what kind of presence, if any, to have in the Gulf – whether sales and marketing will suffice, or whether broader operations, such as investment management, are necessary. Al-Samahiji says establishing a presence in the region has helped the firm “enormously”.


“Our business has grown times 15 since we moved onto the ground here,” says Al-Samahiji. “It’s a huge competitive advantage.”


The firm opened a representative office in Kuwait in 2005, but the major coup came when the firm signed a deal with SAIB in March 2008. The investment management operation of BNP Paribas said it would buy a 25% stake in SAIB Asset Management Company, a newly formed subsidiary of SAIB. The joint venture is named SAIB BNP Paribas Asset Management.


In Saudi Arabia SAIB has expertise in Saudi and GCC equities and in Islamic funds. It has $2.2bn of assets under management from corporate and retail investors. Access to the Saudi market is nortoriously difficult.


“When we decided to do an acquisition in Saudi Arabia that was to help us expand our high-net-worth and ultra-high-net-worth base,” says Al-Samahiji.

Access all areas
“We were not originally looking to manage money for other investment managers, but we will do that now because they have access to clients that we do not have access to.”


Saudi authorities licensed BNP Paribas as a bank in Saudi Arabia in 2004, a fact that also helped the bank’s investment management operation enter the market.


With Saudi ultra-high-net-worth clients on its books, €9bn of sovereign money, and a strong position in Islamic finance, BNP Paribas is a success story in the region. If some of this success is down to Al-Samahiji’s contacts book, should not other foreign managers hire people like him for their local knowledge and contacts?


Al-Samahiji says: “Sure. Lift out a team, or recruit individually over a longer period.”


In the Arabian desert, cold calling will get you nowhere.