If you build it, they will come

The UAE's second financial free zone has some new tenants. George Mitton talks to Steve Barnett, financial centre development director. The last time Funds Global MENA visited Steve Barnett, he had plenty of free office space; as yet, no finance firms had moved in. Perhaps his good mood on this visit is due to his new tenants. After many months of build-up, the Abu Dhabi Global Market (ADGM) is starting to fill. The financial free zone is Abu Dhabi’s answer to the more well-established Dubai International Financial Centre (DIFC), which is about a 90-minute drive away. Like the DIFC, the Abu Dhabi zone allows companies to be wholly foreign-owned while providing a legal structure based on English common law. For Abu Dhabi, the motivation to set up the zone is clear. The local government wants some of the vast sums of money held by Abu Dhabi’s government-related wealth funds to be managed within the emirate, and so accrue benefits to Abu Dhabi in terms of employment and foreign investment. For that to happen, Abu Dhabi needs to tempt asset managers and ancillary companies to operate on the ground, hence it has built a complex on Al Maryah Island to house them. It’s Barnett’s job to bring the tenants and he’s happy to say he’s had some success. The centre issued its first full financial licence in January to Afkar Capital, which describes itself as an incubator for asset management companies. Other licences followed: Alpen Capital, Eshara Capital, Equitativa Asset Management, Macquarie Capital Middle East, Aberdeen Asset Middle East and others. “In a difficult market environment, we’re well ahead of where we expected to be,” he says. 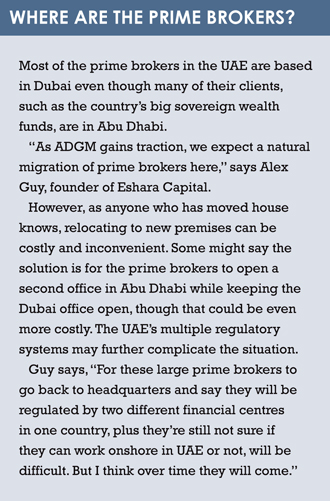 The tenants are coming for various reasons. ADGM can issue licences quickly, with a flexible system that allows client firms to add or subtract regulated activities to their licence at will, says Barnett. The zone also offers structuring options for funds and special purpose vehicles (SPVs) used in private equity transactions, all with a high standard of law that is equivalent, he claims, with European jurisdictions. Perhaps the most appealing attribute is proximity to the wealthy institutions Barnett refers to collectively as Abu Dhabi Inc., the largest of which, the Abu Dhabi Investment Authority, is thought to be among the world’s biggest sovereign wealth funds. To summarise Barnett’s pitch in five words, you might say: be where the wealth is. EARLY BIRDS
For some of the companies that have signed up already, getting in early was another incentive. Alex Guy, founder of Eshara Capital, says he had good access to Barnett’s team as he was setting up his company. “The ADGM team are at the beginning of their journey, so they’re easy to get in front of,” he says. “It’s easy to meet them for a coffee.” In contrast, he says, the DIFC is, “much more established. All the prime brokers are there, but the application waiting time is much longer. In terms of getting in front of them [at the DIFC], I gather it’s difficult.” Guy says that, in time, he hopes more of the prime brokers currently based in Dubai will relocate to Abu Dhabi, making it more convenient for his firm and the other ADGM entities to do business with them (see box). REPUTATION
Not all the coverage of ADGM has been positive, however. Ever since the centre’s creation as a legal entity in February 2013, some have questioned whether the UAE needs a second financial free zone. The creation of ADGM means the UAE now has three financial regulators: the Financial Services Regulatory Authority, which regulates ADGM; the Dubai Financial Services Authority, which regulates the DIFC; and the UAE’s onshore regulator, the Securities and Commodities Authority. All this in a country of fewer than ten million. Other critics have focused on rental costs in ADGM’s premises. Anticipating such costs to be high, some of the local press suggested the new centre would not be cost-effective for financial companies. Barnett takes issue with this point. “There was an article looking at pre-launch prices which made the real estate costs look expensive. The reality is that the costs are in line with what you’d expect for equivalent real estate in the region. Mubadala [the property developer] has provided grade-A property where all you need to do is put the carpet down and move in your furniture. The efficient use of space is second to none and the views aren’t bad.” Barnett also refuses to portray himself as competing with the DIFC, arguing that the wealth in the UAE and the surrounding region is enough to support both financial centres. NOT EXOTIC
The competition, he says, is anyway with financial centres outside the region. Barnett says he wants ADGM to offer a credible alternative to jurisdictions such as the Cayman Islands. This would please local asset managers, he claims, who – believe it or not – would rather not have to travel to the Caribbean every time they want to set up a fund. “A lot of people don’t want the cost of travelling to exotic locations where this structuring often goes on,” he says.  “It’s hard to stand up in front of owners and principals and say, ‘I’ve just done a trip to the Caribbean.’” The idea of AGDM, then, is to be a middle ground – a financial centre located in an emerging market, the UAE, which offers regulation and transparency to match European domiciles. Of course, that is also a pitch the DIFC might give to tempt potential tenants. For now, the DIFC is clearly the most established financial centre in the country. It will be interesting to see if Barnett’s team can tip the balance. ©2016 funds global mena