ABU DHABI INTERVIEW: All you need to trade is 60 seconds 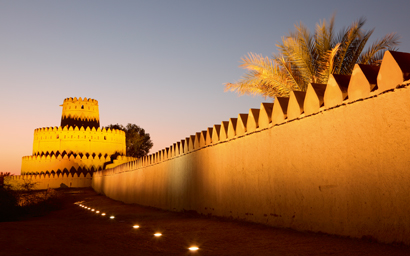 The chief executive of the Abu Dhabi Stock Exchange talks about accessibility, bringing new instruments to the exchange and encouraging firms to list. George Mitton reports.

At the Abu Dhabi Stock Exchange, or ADX, a handful of Emirati investors lounge on comfortable chairs amid screens displaying stock prices in yellow and red lights. Though the market capitalisation of the exchange is nearly $120 billion, the atmosphere is relaxed today, as though the summer lull – a typical feature of life in the Gulf countries – has yet to end. Indeed, the index of the exchange, which dropped sharply in August, has yet to recover and remains 6% below where it started the year, a result variously attributed to the low oil price or weak growth in China.

Appearances may be deceptive. Rashed Al Balooshi, chief executive of ADX, says he is as busy as ever, arriving late to our interview in his office – with profuse apologies – having been tied up in meetings all morning. The previous day, he says, he began his day at 6.30am and returned home at ten at night.

There is much activity behind the scenes at the exchange, he explains. The appearance of a lull – the lack of new listings, for instance – has not stopped the team from working on new initiatives. What can investors in the exchange look forward to seeing in the near future?

One aim is to bring real estate investment trusts (REITs) and warrants on to the exchange in 2016. ADX is working with the Securities and Commodities Authority (SCA), the UAE regulator, on rules for REITs and hopes soon to begin the process of convincing market participants to issue the new instruments. Al Balooshi is keen to have a more diverse range of instruments traded on exchange, even including derivatives at some point.

The exchange is working to make equity trading more automated, too, including a more efficient way of distributing cash dividends. This builds on work done earlier this year when Massar Solutions was the first company to list on the exchange under a new electronic initial public offering (IPO) platform. 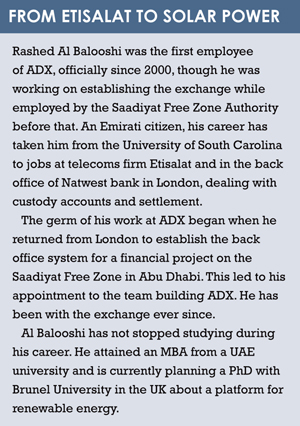 Perhaps the initiative Al Balooshi is most proud of the Sahmi Service, a self-service machine where, within a minute, investors can obtain investor numbers that allow them to trade on the exchange. Al Balooshi says these machines, which can also issue investor statements and accept fee payments, could be installed in shopping malls.

“We are the first in the Middle East to issue investor numbers in less than 60 seconds,” he says. “There are no other exchanges doing it.”

GOING PUBLICAnother promising trend is the rise, in proportional terms, of institutional investors on ADX, something asset managers and custodian banks have been calling for (see box, next page).

Al Balooshi admits that what many people want – and he himself would like to see – is more UAE-based companies choosing to list shares on ADX. A common gripe of fund managers in the region is that the UAE’s stock exchanges do not reflect the diversity of its economy. The banking and real estate sectors are well represented, the petrochemicals, aviation and tourism sectors less so.

One way ADX is trying to address the shortage of listings is by allowing private companies to list shares. A change in UAE regulation last year allows companies to form private joint stock companies, whose shares are traded on the secondary exchange. Manazel Real Estate and The National Investor, an asset management firm, have listed their stock this way. Al Balooshi says he hopes private listings will be a precursor to more public listings.

He is sure more IPOs will happen. “We only need one big company to go forward and I’m sure the rest would follow,” he says. 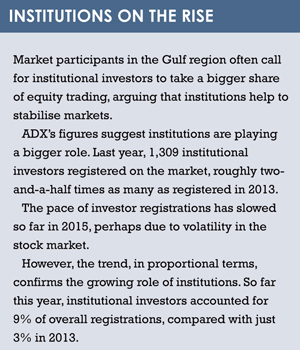 A popular explanation as to why company management are wary about going public is fear of losing control of their business. Company founders, some of whom built their businesses from nothing, are reluctant to surrender ownership to shareholders they do not know. However, Al Balooshi argues that changes to the UAE Companies Law should reassure company founders. He also argues that the disclosure and transparency required in the listing process is, ultimately, beneficial because it promotes better corporate governance.

Could there be another reason companies are delaying their plans to list, namely the low oil price, which has caused analysts to reduce growth forecasts for the region? He says companies should ignore short-term market noise.

“The price of oil does have an effect,” he says. “But people should look at the macro level. The price went down. What does that mean to Abu Dhabi? Statistics suggest Abu Dhabi will not be as negatively affected as people thought. Anyway, if we are realistic, we can always see the UAE taking advantage of these situations.”

FREE ZONES
Another development that should affect ADX is the opening of the Abu Dhabi General Market (ADGM) to business this year. A financial free zone formed under the same legislation that gave rise to the Dubai International Financial Centre, ADGM hopes to attract global financial firms with the promise of 100% ownership and its own regulatory system.

ADX has a surprisingly intimate relationship with ADGM. The headquarters of the ADGM authority – an anvil-shaped building on Al Maryah Island – were built to house ADX. There is a large trading hall with screens for stock price information and padded chairs with spaces for trading terminals. ADX never took occupation of the building, though.

When I ask why ADX chose not to occupy the building, Al Balooshi says the free-zone status of the ADGM makes it impossible: “By law we have to be onshore.” The relationship between ADX and the new free zone will nevertheless be complementary. “We believe when investors come to ADGM, they can also make use of the opportunities offered by ADX.”

Maybe the new investors who, it is hoped, will arrive in ADGM will have another effect: kickstarting a new wave of IPOs. If so, this could help diversify the equity sectors on offer on ADX, no doubt pleasing the many new institutional investors that have registered to trade in larger numbers than before. These two trends – a rise in listings and an increasing institutionalisation of ADX – would be a cause for celebration.