IRAQ INTERVIEW: ‘The whole region is boiling. Every country is concerned for its survival.’ 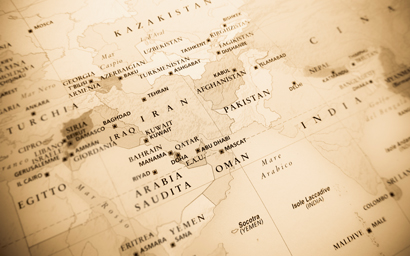 Hoshyar Zebari, Iraqâs finance minister, spoke to Sharmila Devi about revenue-sharing with Kurdistan, Russiaâs role in Syria and a new deal with the IMF that could lead to a loan.

One way to strengthen the country’s finances could be with help from the International Monetary Fund (IMF). In a deal reached in early November, Iraq agreed to let the IMF monitor a programme to reduce the deficit in Iraq’s non-oil sector. Iraqi authorities have also committed to strengthening public financial management, improving measures to combat money-laundering and countering the financing of terrorism.

The programme, which is due to begin at the end of the year, “will allow the Iraqi authorities to build a track record for a possible [IMF] financing arrangement”, says Christian Josz, a mission chief at the IMF, in a statement.

Iraq could use the help. The country’s current account deficit is expected to rise to 7% of GDP this year, according to the IMF, and foreign exchange reserves are declining. The war against Islamic State is proving intractable and efforts to reform the economy and cut down on corruption face internal opposition. Hoshyar Zebari, the Iraqi finance minister, spoke to Funds Global MENA about the country’s future.

What does the IMF deal mean?
This will help the Iraqi government to implement financial and economic policies prescribed by their memorandum. Primarily, it doesn’t entail any loans or financial assistance but it is a way to organise our public finance management and banking system, so it’s a more of a technical support for the financial sector in Iraq. What is of huge importance is to see how much progress we have made in a number of benchmarks. This programme will take at least six months to one year to see if the country is prepared or willing to implement those reforms and to be on a firm footing.

How bad are Iraq’s finances?
It was very bad. This was the toughest year for us, 2015. But believe me, we got an international verdict [from the IMF] that we’ve done excellent work during this year by cutting public expenses dramatically to save money. They were absolutely surprised and shocked to see how much money we’ve saved and not spent.

We didn’t finance unnecessary things, we maintained our basic needs for military, for food, for medicines, for internally displaced people, for salaries. But in other areas, we made dramatic cuts and I should say even now we have some surplus.

Reform is ongoing, this is part of the programme with the IMF and with the World Bank and there have been a number of steps in that direction. 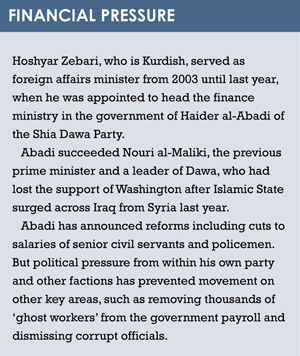 The whole region is boiling and every country is concerned for its survival. Even the GCC have their own deficit with the decline in oil prices. The international oil companies and energy experts believe this decline will continue but may pick up next autumn. About next September or October, the price will rise upwards.

How safe is Haider al-Abadi’s position as prime minister?
He is safe. To be fair, some of the reports that he was about to increase non-oil revenues [through reforms such as big cuts in the number of public sector workers] didn’t work as he planned. They were withdrawn at the slightest protests here and there, which didn’t give the impression of a determined government. But it’s still committed to move on this reform issue. It’s not easy, reforms are painful, but the government is still committed. If a policy is not painful, it’s not working, especially in this field. The government is safe. There are no plans to change or replace it.

What does increased Russian involvement in the war against Islamic State mean in terms of relations with the US?
With the Russians, there hasn’t been an alliance, despite some statements to the contrary by some politicians, by some members of the Shia coalition or by the anti-American forces. Even the Russians have made it clear that their mission is confined to Syria, not to Iraq. There have been good relations between us and Russia. Most of our arms come from Russia – we buy from them. And with Iran, we also have excellent relations, but the policy that we adopted in 2003 and up to now is that we should not be part of any axis. It doesn’t serve our interests. The international coalition [against Islamic State] that we have, we invited them, they came at our request so that is where we are with the Russians.

The Americans have been most helpful to us on these economic and financial challenges. They have used all their weight with the international financial institutions, they have been giving us capacity-building assistance. I have no complaint, no scepticism about their sincere commitment to help Iraq in these difficult economic and fiscal conditions.

What has happened to revenue-sharing with the Kurdistan Regional Government (KRG)? [Baghdad renewed its constitutional commitment in a deal last year with the KRG to pay its 17% share of the national budget. But Baghdad has only fitfully made payments, saying the KRG has sold oil illegally without its authority and failing to meet production quotas. Kurdish officials are expected for talks in Baghdad later this month.]

My idea is to make the KRG face reality and we are going to put last year’s agreement on oil in the 2016 budget as it is. [I told the KRG] if you are interested to take up this offer, come to Baghdad to negotiate, either to instate the deal or to seek a new one if you are not happy with the first one. Otherwise, we have a limited time until the end of December when the parliament will endorse the new budget and then there will be difficulty if you don’t find your share in the new budget.

What do you think about the KRG abandoning its efforts to raise funds via an international bond?
I advised them, actually. It was my advice. I told them, ‘Listen guys, the price, the interest rate is very high, the yield is high. You had better wait. Ideally, if we get our bond issue then the money we get, you will benefit from that too so you have a share in that. Don’t rush things.’ And I think they accepted the idea, they put that on hold now.