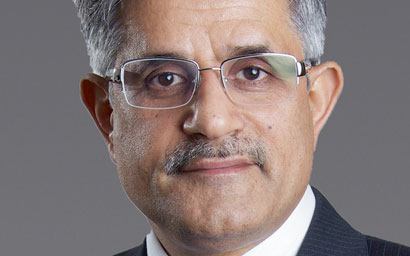 The oil price wonât affect us, says the chief executive of Bahrainâs sovereign wealth fund. George Mitton talked to him.

If the chief executive of Bahrain’s sovereign wealth fund is concerned by the sharp drop in oil prices, which some fear could lead to budget shortages in the Gulf kingdom, he doesn’t show it. Coming straight from the stage at the World Financial Forum in Bahrain to a private interview, Mahmood Hashim Al Koheeji, who has led the Mumtalakat fund since March 2012, is full of energy and talks rapidly in a friendly manner.

Is he putting on a brave face? Bahrain has been singled out as the Gulf country most exposed to the fall in oil prices, on account of its relatively low oil reserves and the significant demands already put on its state coffers.

Some have suggested the country will need to borrow to balance its books. Surely, this belt-tightening is bad news for the national sovereign fund?

No, he maintains. The oil price is irrelevant.

“We do not depend on government revenue,” he says. “If the oil price goes up or down, we continue to grow. We have not asked the government for money.”

A DIFFERENT ATTITUDE
The reason Mumtalakat can be so indifferent to swings in the price of oil is because of how it is structured. Unlike the older, larger sovereign wealth funds in the region, such as the Abu Dhabi Investment Authority (ADIA), Mumtalakat is not simply a repository of oil wealth. In fact, it is better characterised as a private equity venture, albeit one with an unusually long-term investment horizon.

The fund’s history underlines its different character. Whereas ADIA, for instance, was founded in 1976 and has grown consistently since then, thanks to oil surpluses, Mumtalakat was created in 2006 when the Bahraini government consolidated several of its national assets under the ownership of a holding company. Mumtalakat has enlarged its portfolio since then – the fund now owns stakes in 38 commercial businesses and is worth the equivalent of $10 billion – but Al Koheeji says it has never received government funding for its investment activities. It has instead paid for them by tapping capital markets – just like a private equity fund.

“I don’t think so,” says Al Koheeji. “We are a long-term investor. Our mandate is to expand our portfolios.”

Al Koheeji’s answer is plausible, once you’ve accepted that a cash-strapped sovereign would find Mumtalakat of limited use. Like any private equity venture, most of its assets are tied up in commercial businesses that it would take time to liquidate. (In contrast, a sovereign wealth fund such as ADIA could, if needed, rapidly sell large numbers of US Treasuries to help meet government funding needs.)

That said, like any private equity venture, Mumtalakat has a cash component. Al Koheeji is unwilling to say how much cash the fund has, apart from that it is a “comfortable” amount.

TRANSPARENCY
This wariness about sharing data on cash reserves is a slight disappointment, as it comes only weeks after Mumtalakat made much of its being awarded 10 out of 10, for the first time, in a ranking of sovereign wealth fund transparency. The top score on the Linaburg-Maduell Transparency Index, which was developed by two researchers at the Sovereign Wealth Fund Institute, an independent research firm, is meant to reward funds that publish up-to-date information on their holdings, strategies and objectives, portfolio value and other details.

Mumtalakat was one of 11 funds to be awarded full marks in the review in the fourth quarter of 2014, putting it on a par with the likes of Norway’s oil fund, Temasek of Singapore and Australia’s Future Fund.

Al Koheeji is understandably proud of the accolade, which reflects improvements in the speed at which Mumtalakat publishes its financial results and the opinions of its independent auditors. He is not transparent about everything, though. He is coy about revealing the fund’s cash reserves and refuses to divulge its acquisition targets – though on this latter point, there may be good commercial reasons for keeping silent. “We don’t make public our acquisition targets,” he says. “In any competition, you don’t announce it until you win the prize.”

At any rate, the fund’s commitment to transparency is refreshing in a region where sovereign assets are often a closely guarded secret. ADIA, for instance, will not say how much money it has, much to the frustration of the many journalists and analysts who would love to know.

Al Koheeji says he would be pleased if Mumtalakat started a trend in which some of the other Gulf sovereign wealth funds became more transparent. But why do the other funds in the region reveal so little? Is it because of fear?

“When you interview them, I will be interested to read the answer,” he says.

Although he refuses to reveal any upcoming deals, Al Koheeji says he hopes the fund will be more active in 2015 than last year. He says his team are looking into one international, one regional and one Bahrain-based deal, which could come to fruition in the coming months. The fund’s debt level is fairly low, he says. It has the capacity to borrow more to fund opportunistic purchases.

FLAG CARRIER
The fund has had some success in reorganising some of its holdings, too. He says it has helped cut losses at Gulf Air, the Bahraini national carrier, from 200 million dinars ($530 million) to 60 million dinars a year in the past two to three years.

And, even though the beleaguered airline continues to lose money, Al Koheeji says he is happy to own it because of its strategic importance. Gulf Air is Bahrain’s link to the outside world and, for an institution hoping to boost the Bahraini economy and create jobs, that link is essential.

This point underlines that, while Mumtalakat is independent of the government, it does play an important strategic role. It was, after all, created to consolidate national assets.

The fund is unlikely to be allowed to forget its obligation to support the Bahraini economy, even if, as Al Koheeji says, it won’t be called on to help meet oil-related government shortfalls any time soon. ©2015 funds global mena