INTERVIEW: ‘It’s a question of flicking a switch’ 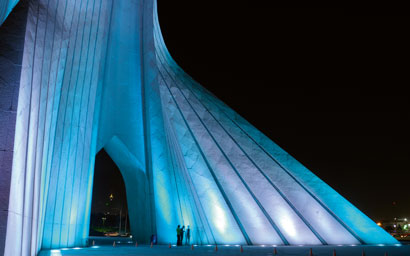 It is a stock market with a capitalisation of nearly $120 million. It includes stocks in a variety of sectors from energy to consumer goods. Crucially, it is remarkably cheap, with an average price-to-earnings ratio of just five times.

And yet most global investors cannot access the Tehran Stock Exchange. Since 2012, Iranian institutions have been banned from using the Swift settlement system, a sanction that effectively prevents foreigners from buying stocks in the country.

This may soon change. In April, Western negotiators reached a deal with Iran that paves the way for sanctions relief. “If things continue to go smoothly, the two biggest sanctions – on oil sales and lack of access to Swift – have to be lifted as Iran’s part of the bargain for curbing its nuclear intentions,” says Dominic Bokor-Ingram, portfolio manager at London-based Charlemagne Capital. “That is the deal.”

Crucially, access to Swift and the accompanying inflow of foreign capital could happen almost instantly. “The Iranian banks are all connected up to the Swift system already,” he adds. “They’ve got codes. It’s a question of flicking a switch.”

PARTNERSHIP
Charlemagne Capital now has a vested interest in Iran opening to foreign investment: in March, it announced a partnership deal with Turquoise Partners, a Tehran-based asset manager.

Bokor-Ingram says it has not yet been decided whether the firms will jointly launch a new Iran fund, or whether Charlemagne will channel its clients’ money into Turquoise’s existing products. The intention of the deal is clear, though: to offer an access route into Iranian equities as soon as Western investors are allowed to buy them.

Turquoise Partners was the ideal partner, he says, because it is already the largest manager of foreign funds in Iran. Seven years ago, before the sanction on Swift was imposed, the firm launched a fund, which raised about $70 million. Because of the sanctions, investors have been unable to add to or withdraw money from the fund, meaning most of that sum is still under management by Turquoise.

Bokor-Ingram believes that, if and when the floodgates are opened, asset managers such as Turquoise could raise many more assets. Partly this is because they do not have many rivals in the West who can challenge their expertise – a consequence of Iran’s isolation from financial markets. “Because of a lack of access, virtually no foreign investor can say they are an expert,” he says.

In addition, the Iranian market is attractive. If it was a fully open market, Iran would be the largest frontier market in the world, larger than either Kuwait or Nigeria. It is a highly developed market with well functioning institutions, an educated populace, and oil and gas wealth. Charlemagne Capital claims that everything is in place for the country’s economy to grow up to 10% a year, if sanctions are lifted.

“You rarely get an opportunity to buy this kind of market at five times earnings, and these are very depressed earnings because of sanctions,” says Bokor-Ingram. “There is no question that if Iran opened today, the interest would be huge.”

THE FLOODGATES
If and when Iranian financial institutions are allowed to access Swift again, Bokor-Ingram expects an almost instantaneous inflow of foreign capital. Investors from pension funds to fund managers to retail investors will want to get into a market at historically low valuations. However, the biggest profits are likely to be made by Iranian investors who can get in ahead of the changes. The Tehran Stock Exchange is an active market, with a daily turnover of about $100 million, and many domestic investors are anticipating a nuclear deal. Bokor-Ingram expects the market to rise as they build up positions ahead of sanctions relief.

It may be possible for a few Western investors to get ahead of the trade too, though only in specific circumstances. As a foreigner, there is no sanction against investing in Iranian equities, so long as you don’t invest in a sanctioned company. The problem, though, is how to get the money into the country. A private individual could fly to Iran, exchange dollars for Iranian rials, and buy the securities in person from a broker. A Western business with operations in Iran could perhaps invest some of its profits in the stock market. These methods would not be practicable for most Western investors, though.

There are some potential complications with investing in Iran, though (see next page). Some larger firms may worry about reputational damage if they go into the market early. It may be the smaller, nimbler and more niche asset managers who can get in earliest.

Turquoise Partners, however, is likely to do well from the opening up. The firm was founded 10 years ago specifically to apply Western financial practices to the Iranian market.

“We have continued to believe in that vision and have invested heavily in making Turquoise the gateway to Iran for foreign investors during the wilderness years of heavy economic sanctions,” said Rouzbeh Pirouz, chairman of Turquoise.

For Charlemagne Capital, an emerging market specialist which established a pioneering reputation by launching Russian equity funds in the early 1990s, the deal offers an appealing prospect too. The firm hopes to reward its investors by getting into markets at a very early stage, at a time when other investors are too concerned about risk.

This strategy can lead to good results, according to Jayne Sutcliffe, its chief executive.

“We believe that Iran exhibits the biggest mismatch between perception and reality that we have seen in emerging markets for 20 years,” she says.