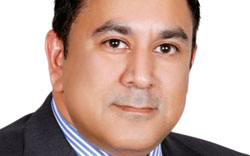 For regional asset managers, the UAE has been the main growth driver in the past year and a half. We asked Saleem Khokhar of NBAD Asset Management about the trends.

Up until this summer, the UAE had one of those bull periods investors dream of. The index of the Dubai Financial Market doubled in 2013 and by the start of June it looked like it might double again this year.

Despite a correction that has since diminished some of this year’s gains, fund managers remain bullish on this market.

It’s easy to attribute the gains to one huge factor: the decision by index compiler MSCI to upgrade the UAE, along with Qatar, to its Emerging Market index.

The announcement was made last June and the two countries formally joined the index in May, a move that gained them a huge amount of investor attention, not to mention inflows from passive and active funds which were obliged to increase their holdings in the two markets to better reflect the changed index.

The new-found buoyancy of the Dubai and Abu Dhabi exchanges, the huge rise in trading activity, the soaring stock values, can all be seen as effects of the upgrade. However, Saleem Khokhar, who is head of equities in the asset management group of the National Bank of Abu Dhabi (NBAD), says there were other, more fundamental drivers affecting the changes too.

“It would be foolish to say it was purely due to the upgrade,” he says, of the stock rally. “Remember that 18 months ago, we were trading at eight to nine times PE [price-to-equity ratio], which is exceptionally cheap compared to the rest of the region. There were several factors that allowed these stock to re-rate.”

One of the factors, independent of the upgrade, was that Dubai’s debt situation became more manageable, which reassured many of the investors who had withdrawn capital from the emirate in the wake of the Dubai crash. In addition, businesses across the UAE were doing better thanks to an improving global economy, which meant improved profits for the hospitality, trade and logistics sectors that Dubai depends on.

Then there were a series of mega projects announced in the UAE that will stimulate the economy, such as a move towards nuclear power, the Khalifa Industrial Zone Abu Dhabi (Kizad) project in Abu Dhabi and the Etihad Rail project that will link the major cities of the UAE and eventually connect with a GCC-wide railway. Besides this, Dubai is building a new airport and, of course, there are the preparations for the 2020 Expo.

LESS OPTIMISTIC
These factors together give Khokhar the confidence to predict further upside in the next 18 to 24 months in the UAE. However, he is less optimistic in the short term.

“With PE ratios at 20x in Dubai and 16x in Abu Dhabi, we do feel they’re fair in terms of valuations,” Khokhar says. “Not overvalued, but fair. There are specific opportunities. On 24-month view it’s a positive picture in terms of growth in earnings.”

Outside the UAE, Khokhar’s team maintain overweight positions in Egypt, which he believes is stabilising under the rule of President Abdel Fattah el-Sisi, and in Qatar, which had yielded an index return of 33% as of the end of September.

After the Saudi authorities announced that the Saudi stock exchange, the Tadawul, would open to direct foreign investment in the first half of 2015, Khokhar’s team also increased their allocation to Saudi equities.

In sum, it is an optimistic picture, though Khokhar is less keen on Kuwait, where there is a lack of corporate transparency, and in Bahrain and Morocco, where liquidity is limited.