The man leading Qatarâs efforts to develop a financial industry is at work on more seeding deals of the kind that brought Barclays and Credit Suisse to Doha. Interview by Alan Chalmers, edited by George Mitton.

Of the many schemes employed by the Qatar Financial Centre Authority (QFCA) to attract an asset management industry to Qatar, deals to provide seed capital to global asset managers have attracted the most attention.

In April last year, the QFCA and Qatar Asset Management, a unit of Qatar’s sovereign wealth fund, agreed to give $250 million to Barclays Natural Resource Investments, a private equity subsidiary of the UK-based bank, to set up a business in Doha.

In October, another unit of the Qatar sovereign wealth fund, Qatar Holding, formed a joint venture with Credit Suisse called Aventicum Capital Management, which has one of its two bases in Doha and invests in the Middle East, Turkey and frontier markets.

LARGE BOUTIQUES
“There will be more coming this year,” says Shashank Srivastava, chief executive at the QFCA. “We are in discussions with a number of firms and they are coming close to fruition. Things are moving through due diligence.”

Srivastava declined to say which companies are in talks with the QFCA, though he says the authority is concentrating its energies on international firms that already have a relationship with Qatar, which offers some clues (see box). 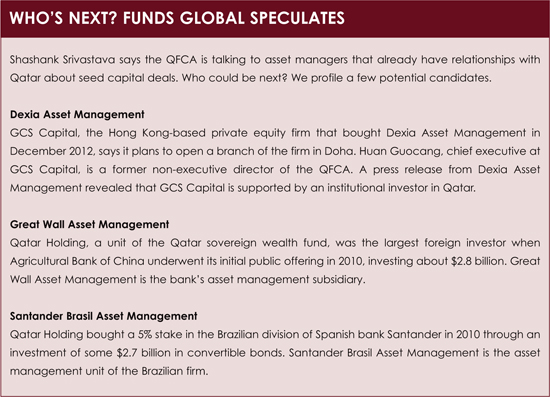 After the big, international players, the QFCA plans to look at offering seed capital to “large boutique” asset managers, says Srivastava. And, after that, some local asset managers may be in line for seed funding. In the past, some local firms have grumbled that they had been overlooked in the QFCA’s drive to develop Doha as a finance capital. Srivastava’s attitude is that they will get their turn eventually.

The QFCA has another interesting project in the pipeline: working with an, again, unnamed partner to provide financing for a platform that will seed start-up asset managers with funds in the region of $10 million to $50 million. “The idea is to seed star managers, individuals, who might be coming out of big shops and who have specialised, interesting ideas that need small-ticket seeding,” says Srivastava.

According to this plan, the platform provider partner would handle the distribution and compliance aspects of setting up as an asset manager in Doha, leaving the individual managers to focus on investments.

“For that we are partnering with a firm that has done this very successfully,” he says.

Seed capital is just part of what the QFCA provides, though. The authority was founded in 2005 to develop the Qatar Financial Centre (QFC), an onshore jurisdiction with its own legal regime, with low taxes and no limits on foreign ownership; an offering designed to attract foreign firms to base their operations in the country.

The QFC has extended its legal framework with regulations for holding companies, special purpose companies and family offices, says Srivastava, who hopes the new rules will attract more businesses to the country.

He sees positive steps in the Qatar Central Bank’s initiative to develop a local currency yield curve and the Qatar Financial Markets Authority’s recent regulations for exchange-traded funds. Meanwhile, there are moves to create a unified regulator, first announced some years ago.

HIGH QFC COSTS
Yet there is still much to do. There are roughly twice as many financial companies in the Dubai International Financial Centre in the United Arab Emirates as are in the QFC.

Assets under management in Qatar-domiciled funds remain stubbornly low (see Roundtable, pages 30-35), though there is more money in segregated accounts managed in the country.

Meanwhile, the Qatari authorities can’t have been pleased by a report by professional services firm KPMG last year that said office costs in the QFC are considerably higher than in Dubai or Bahrain.

However, Srivastava is realistic about the scale of the task he faces.“There’s still a lot of work to be done,” he says. “We have a mile and a half to walk yet.”