The chief executive at QInvest talks to George Mitton about a joint venture with EFG-Hermes that could create the regionâs biggest investment bank.

“You can build your business organically, but it takes a long time,” says Shahzad Shahbaz, chief executive at Qatari investment bank and asset manager, QInvest.

“This deal jump-starts the process for us.”

Shahbaz is quietly confident when interviewed in QInvest’s office on the 39th floor of the Tornado Tower (pictured far right), a futuristic skyscraper in the Qatari capital, Doha, that is distinctive because of its twisting shape.

INJECTION
It is the satisfaction of a man whose company is about to make a sudden growth spurt. A joint venture with Cairo-based investment bank EFG-Hermes will transfer ownership of EFG-Hermes’s three business lines – asset management, brokerage and investment banking – to a new entity based in Qatar that will be 60% owned by QInvest. As part of the deal, QInvest will inject $250 million in the merged company. After a year, the Qatari firm has the option to acquire the remaining shares.

EFG-Hermes was always going to be an appealing target for the Qatari firm. Founded in 1984, EFG Hermes says it has more than 1,000 employees and a presence in nine countries –  the kind of network that takes years to build.

QInvest, meanwhile, has as its main shareholder the state-owned Qatar Islamic Bank. Like other Qatari entities that have the oil and gas-rich government behind them, QInvest has considerable capital at its disposal. Shahbaz says that from the day it was licensed in Qatar in 2007, mergers and acquisitions have been part of the growth plan.

“With this EFG deal, we will take a big step,” says Shahbaz. “The combined operation will be by far the largest investment bank in the region. It gives us a great brand, geographic footprint, established track record and expertise. Combine that with what we’ve built in Qatar and the Gulf Cooperation Council, plus the capital resources we have, and it’s a powerful combination.”

COMPLICATIONS
For the Qatari government, there are issues of prestige, too. If the deal is successful, this large investment bank spanning the Arab world will be a Qatari-controlled entity.

For EFG-Hermes, the deal was a more pragmatic affair. The Egyptian company was caught up in the political and economic instability that followed the country’s revolution, and saw its income fall 81% in 2011. At the end of 2010, shares of EFG-Hermes’s holding company were trading on the Cairo stock exchange at about 28 Egyptian pounds ($4.60).

By the beginning of October this year, their price had more than halved to about 11 Egyptian pounds.

The deal has not gone completely smoothly, though. The transaction was complicated by a counter bid from Planet IB, a consortium of Egyptian and Gulf-based investors.

“The proposed acquisition keeps a flagship Egyptian multinational intact and prevents its break-up,” said Ahmed El Houssieny, chief executive at Planet IB, in a statement issued on May 31. 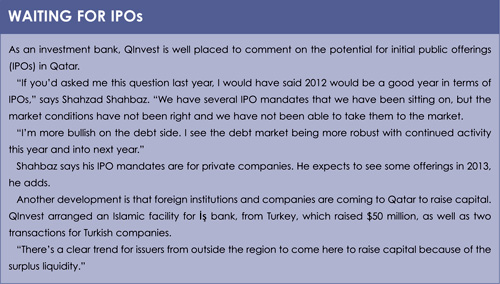 There have been setbacks besides Planet IB’s attempt to intervene. In July, the Egyptian Financial Supervisory Authority suspended the deal because it wanted more information to be disclosed to EFG-Hermes shareholders. QInvest worked with the regulator to address the gaps in the information, says Shahbaz. A second EFG-Hermes shareholder meeting was called for September 16.

AMBITIOUS
Shahbaz says the Egyptian regulator’s suspension set back the transaction by four to six weeks. At the time of going to press, the deal was expected to close imminently.

Shahbaz says QInvest has yet to decide what name the merged company will use, though.

“The EFG brand is powerful and part of the deal is to have that brand. I don’t see that brand disappearing. QInvest, for certain types of activity, has value,” he says.

QInvest, like the city of Doha, has large ambitions. From its office window can be seen several skyscrapers with remarkable modern designs, and more under construction. Yet if you look inland, the tall buildings soon peter out and two-storey blocks extend into the plain where the horizon is obscured by heat and sand. Doha still has a lot of space to grow.

“There is a lot to do in the immediate future to be sure we get it right,” says Shahbaz.

“But once we’ve done that, the deal puts us in a good position to grow in some adjoining markets. Africa becomes interesting. We might look at expanding in Turkey where we have an office, in India where we have a strategic investment, or other parts of South-East Asia.”