A modest GCC growth rebound with the focus on reducing deficits 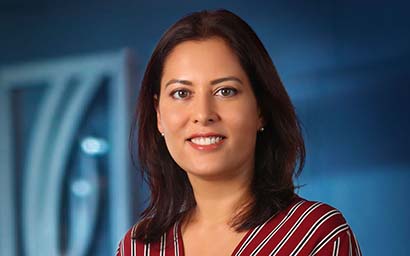 The outlook for the Gulf Cooperation Council (GCC) economies this year is brighter, with coronavirus vaccines being rolled out relatively quickly and the prospect of an improving global backdrop – particularly in the second half of 2021, writes Khatija Haque. However, budget deficits are likely to remain substantial, limiting the scope for additional fiscal stimulus to support a recovery and resulting in more debt issuance from the region this year.  In 2020, GCC economies faced a double whammy of economic recession on the back of the coronavirus pandemic as well as sharply lower oil revenues. The coronavirus-related lockdowns had a devastating impact on global oil demand, resulting in sharply lower oil prices – down -33% year-over-year (YoY) on average last year – which in turn drove oil production cuts. This resulted in substantial budget deficits across the region prompting several countries to implement budget cuts and, in Saudi Arabia’s case, higher taxes in response. We estimate the weighted average budget deficit across the region reached 11% of GDP, the widest since 2015. As a result, the extent of direct fiscal stimulus in response to the pandemic-related shutdowns in the GCC was modest compared to many other countries in the world, and the focus was largely on providing liquidity via central banks to ensure targeted relief for affected businesses and households. 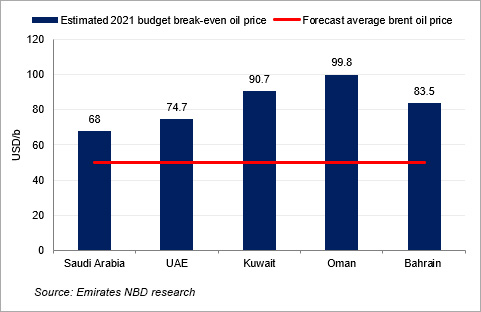 To finance the budget shortfalls, GCC sovereigns issued almost US$60 billion in bonds and sukuk last year and $63billion in loans, according to data compiled by Bloomberg. Domestic debt issuance also helped finance last year’s budget deficits in some countries, including Saudi Arabia. These figures exclude bond and sukuk issuance by GREs, sovereign wealth funds and corporates in the region – total bond and sukuk issuance from GCC issuers last year exceeded $126 billion, up 24% from 2019.    Oil prices have recovered from their Q2 2020 lows, and as activity normalises around the world with the rollout of coronavirus vaccines, we expect demand for oil to recover as well. With OPEC+ adopting a cautious approach to increasing oil production, Emirates NBD expects Brent oil prices to average $50 per barrel in 2021, up around 16% YoY. However, even at this higher price, our estimates of budget break-even prices indicates that all the GCC oil producers will continue to run budget deficits in 2021, albeit smaller than in 2020.  Tapping capital markets
GCC sovereigns have been quick to take advantage of the low-yield environment and tap capital markets this year. Oman, Bahrain and Saudi Arabia having already issued sovereign bonds totaling $11.5billion since the start of the year and total GCC bond and sukuk issuance reached $18.1 billion in January alone. In addition to accessing international capital markets, we expect continued development of the local currency debt market in the region as well, with the UAE recently approving a strategy on this front.   With limited scope for greater spending by governments in the region this year, the economic recovery in the GCC will in our view be driven largely by an improving external backdrop, and an aggressive rollout of coronavirus vaccines in order to speed up a return to “normal” activity. The UAE ranks second globally behind Israel in terms of the share of the population that has received at least one dose of a Covid-19 vaccine, while Bahrain is in fourth place.  Despite the tightening of restrictions in recent weeks in most developed and many emerging economies, we expect the ramp up in vaccine production should allow a greater share of the world’s population to benefit, allowing restrictions to be eased in the second quarter of the year. Pent-up demand should help to drive a sharp rebound in global growth into the second half of the year, which will benefit the trade and logistics hubs in the GCC as well as allowing OPEC+ countries to gradually increase oil production. At the same time, major central banks are expected to keep interest rates at record lows and maintain easy monetary conditions well into 2022. As most GCC currencies are pegged to the US dollar, low borrowing costs in the region will be supportive of growth in the non-oil sectors, as will a weaker US dollar. Overall, we expect GCC economies to grow 2.3% on average this year, on a GDP weighted basis. Khatija Haque is the Chief Economist and Head of Research at Emirates NBD © 2021 funds global mena