A rarity of uncommon visibility and unusually high growth 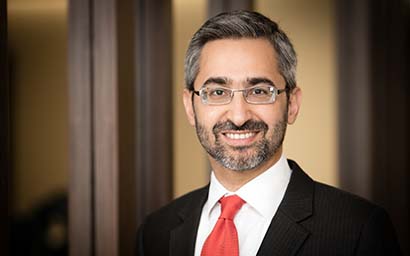 Qatar offers a rare combination of stability coupled with certainty of one of the strongest growth stories of the coming decade, writes Akber Khan. In an unpredictable world, this deserves a significant valuation premium yet investors can still enter at bargain prices. A thumb-shaped peninsula, slightly larger than Cyprus, the state of Qatar was relatively poor and undeveloped long after its neighbours began developing their hydrocarbon reserves around the middle of the 20th century. Sharing the world’s largest non-associated gas field with Iran, Qatar boasts 12% of all proven gas reserves. The decision to monetise this gas by freezing it to -162⁰C, led in December 1996, to the state’s first shipment of Liquified Natural Gas (LNG) to Japan. Over the next fifteen years, LNG output soared to 77 million tonnes a year. By the start of 2011, tiny Qatar’s global share of LNG exports had reached a staggering 31%; such was Qatar’s dominance that Malaysia and Indonesia, the second and third largest LNG exporters, accounted for less than 20% combined. ­­ In 1996, when Qatar began exporting LNG, GDP was at US$9 billion. By 2011, the population had more than tripled to 1.9 million and GDP was 19 times higher at $167 billion. In a few short years, previously obscure Qatar had not just overtaken its neighbours’ GDP per capita, but every country on the planet. The Qatar Stock Exchange (QSE) introduced a benchmark index in August 1998, by 2011 it had risen almost eight-fold. 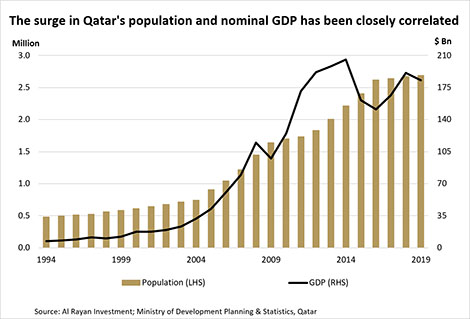 Ten years later, the population now stands at 2.7 million, GDP at $185 billion with a sovereign credit rating of AA-/Aa3. While the state’s balance sheet is of enviable strength, little else seems to have changed; why invest in Qatar now? Kick-off
In less than twenty-two months, the whistle will blow on the opening match at the month-long FIFA World Cup in Qatar. The global festival of football is likely to attract upwards of half a million visitors; some estimates are up to three times greater reflecting pent-up desire to travel following Covid-19 vaccination rollouts. Never before has football’s quadrennial been held in such a small country. In Russia 2018, the farthest distance between stadiums was 2,500km, or a five-hour flight, the Qatar comparable is 67km. In 2026, the World Cup will be jointly hosted by Canada, the US and Mexico with visitors spread across an entire continent. Qatar 2022 will be more like an Olympics where, for the first time, fans can stay in one city for the duration of their stay and attend up to three matches in a single day. To cater to the event, Qatar accelerated its longer-term infrastructure plans which included expanding Hamad International Airport and Hamad Port; completing a $40 billion underground metro network; spending $200+ billion on new roads and highways, drainage and sewage, electricity generation, desalination and industrial water treatment plants, parks and public spaces, museums and other cultural sites, building an entirely new suburb north of Doha, and, of course, the eight stadiums for the World Cup itself. Much of this spending is nearing completion and focus is now on meeting needs of football fans when they will not be watching football: eating, drinking, travelling, security, tourism, medical, retail, entertainment and more. Effectively, a party lasting several weeks will be held across most of Qatar and delivering this will necessitate a surge in activity starting 9-12 months prior to kick-off (also likely to cause an increase in population). Profits – and probably dividends – will be boosted for numerous listed companies across sectors such as telecoms, logistics, real estate, transport, hospitality, consumer, utilities, medical and insurance. Investors with a 12-18 month investment horizons should place their bets now. LNG output
By mid-2023, the World Cup excitement will have subsided. But by then, only two years will be left for the next milestone; in February 2021, contracts were signed with contractors Chiyoda and Technip to take Qatar’s LNG output to 110 million tonnes by 2025. By 2027, output will climb to 126 million tonnes, 64% higher than today’s 77 million. The bill: an estimated $29 billion. In 2019, Qatar placed a $20 billion order for 100 LNG vessels with Daewoo Shipbuilding, Hyundai Heavy and Samsung Heavy Industries which are to be delivered through 2027. Qatar’s LNG expansion plans are clear and, with no concerns over funding, offer extremely rare visibility on government spending and economic growth for an entire decade. Unsurprisingly, Qatar’s nominal GDP has been closely tied to LNG output so, on current plans, should grow more than 60% by 2027. 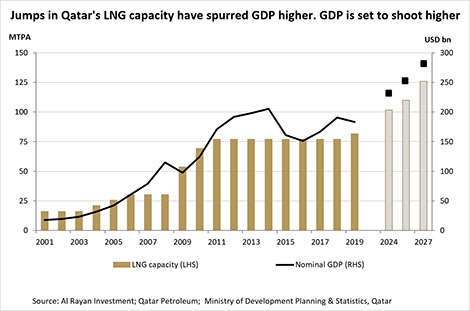 As seen during Qatar’s LNG development during the 2000s, the multiplier effect across the non-hydrocarbon economy was transformational. Qatari banks will play a key role in the coming years and account for half of the stock market’s capitalisation. With banking system ROE and capital adequacy ratios in the high teens, non-performing loans less than 2.5% and dividend yields above 4%, double-digit asset growth expected in the coming years leaves valuations very appealing. Further, additional gas supply will likely fuel downstream expansion for listed companies such as Industries Qatar, Mesaieed Petrochemical and Qatar Aluminium Company. Unusually visible growth
For investors with a nearer term investment horizon, the focus is football. For those able to use a longer lens, Qatar offers unusually visible growth over an unusually extended period. This deserves a premium valuation, yet the domestic stock market’s average dividend yield is a generous 5% with mid-teen earnings multiples. In an increasingly carbon sensitive world, countries are trying to rapidly shift from coal and oil to gas and, preferably, solar and wind. As the cleanest fossil fuel, exponential growth in gas demand is set to continue in the coming decades. Behemoths like China have targets to double LNG imports by 2030. Qatar is an interesting way to play the global fight against climate change. On a practical note, global investors generally benchmark returns in US Dollars. While Qatar may boast growth more typical of frontier markets, currency is no concern given a long-standing US Dollar peg. Further, actively managed emerging market funds remain underweight Qatar versus their benchmarks. The most convenient way to gain broad exposure to Qatari stocks is via one of two QSE-listed exchange traded funds: the $115 million QE Index ETF (ticker: QETF) and $150m Al Rayan Qatar ETF (QATR). The former tracks an index of mostly large cap, conventional stocks, the latter an index of large, medium and small cap, Sharia-compliant stocks. Both pay dividends and have competitive expense ratios of 0.50%.  Akber Khan is the senior director of asset management at Al Rayan Investment © 2021 funds global mena

ADGM Authority to be led by Mark Nicholas Cutis